This issue we chat to Dr Chris Leatt, the man behind the neck brace to get the low down on the development of this iconic piece of kit.

Leatt and neck braces go hand in hand, having brought the technology to the mountain bike and motorbike world. Dr Leatt is the head of the company and studied medicine at the University of Cape Town and went on to work in neurosurgery before moving on to explore the viability of a neck protection system to be used in helmet-clad spots. Dr Leatt is an active motorcyclist and raced competitively as well as providing medical coverage for events. We asked him some questions to him about his neck brace and how it all came together.

What is a neck brace, and what are the benefits of wearing one?

A neck brace is a rigid device worn around the neck which interacts with the user's helmet or head to reduce catastrophic neck injuries in case of a fall.

Leatt created the first neck brace, but what was the process that led up to the development?

Yes, before the development of the neck brace, only foam collars existed. These were not considered in the initial design process for two reasons – so as not to influence the ideal and most efficient neck brace design, as well as the fact that when your head extends over the collar in an accident, they can increase neck forces where the collar acts as a fulcrum. The HANS device was used in automobile motorsports before the invention of the Leatt-Brace®. However, this device works in neck tension (elongation) during an accident, not compression as is the case in two-wheeled sports. The process of development included a review of neck injuries, the accidents that cause them and the major forces at play during a fall onto your head. Next, the thesis of a rigid load transfer device – alternative load path technology (ALPT) was developed. This required the neck brace to interact with the underside of the helmet and sit on the body in such a way as to be in the right place at the right time and only fail if the loading dynamics were of a magnitude that would cause damage to the body structures the neck brace was resting on, whilst still removing a component of the initial load. 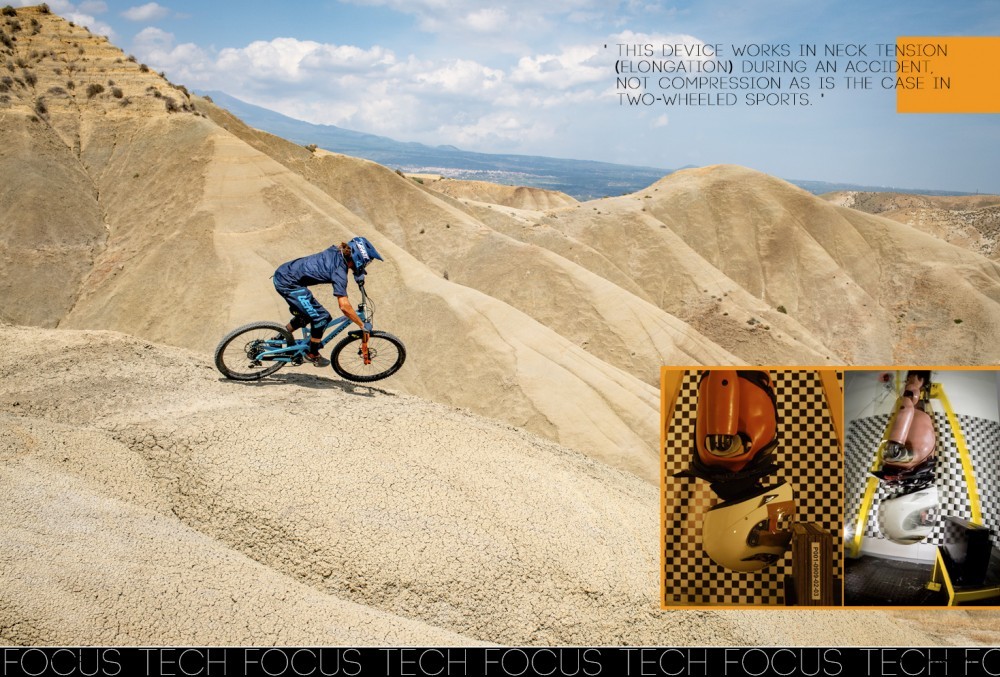 What exactly does a brace do in the event of a crash and what injuries do they help to prevent?

The neck brace acts as an ALPT (Alternative Load Path Technology ) device to transfer load otherwise directed to the neck to other body structures. In a fall without a brace, the force in a fall (caused in part by the weight of the torso) would be transferred from the ground to helmet, then to the neck via the skull base. With a neck brace in place, the force would go from the ground to the helmet which rotates to a point and interacts with the brace. Part of the energy is thereby directed to the brace, and not all the force goes via the skull base to the neck. In so doing, the force transmission through the neck is reduced, and the threshold required to produce a neck injury is not reached, reducing catastrophic injuries. Injuries protected against are flexion/extension and coupled axial loading injuries. In addition, brain forces are reduced – by limiting post-impact head whip and so are collarbone injuries by shielding the clavicle from helmet rim strikes.

Is it just downhill riders that should be wearing them or do they have applications outside of downhill?

Any helmeted sports or occupations where a fall on the head can result in a neck injury can benefit.

Do they have to work with a specific helmet?

Generally, the Leatt-Brace® works with all helmet types. Whether the head is stopped by the helmet rim or the chin. The sizing, fitment and adjustment are crucial to get right – just like the sizing of a helmet. When looking at a helmet/brace combination, it makes sense to select a helmet that does not have a large rear lower helmet projection, as was a design trend a few years back. 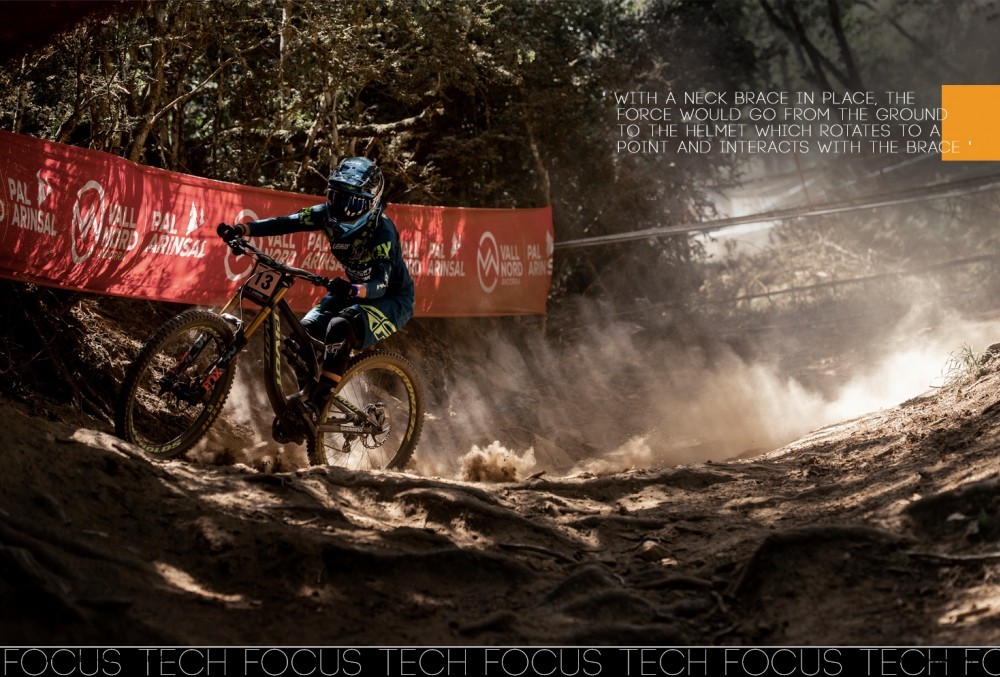 Do they limit the movement of a rider's head, and how would that affect how you ride a bike?

When a neck brace is sized and fitted correctly, limitation in normal head movement while riding is not an issue. If anyone experiences this, it would be a good idea to ask a LEATT agent or reseller to assist you in proper fitment and set up.

Leatt does lots of research into injuries, does the data support the use of neck braces in mountain biking?

It does indeed – a bit of a no-brainer really, both in lab testing and clinical data.

Thanks to Dr Leatt and Leatt 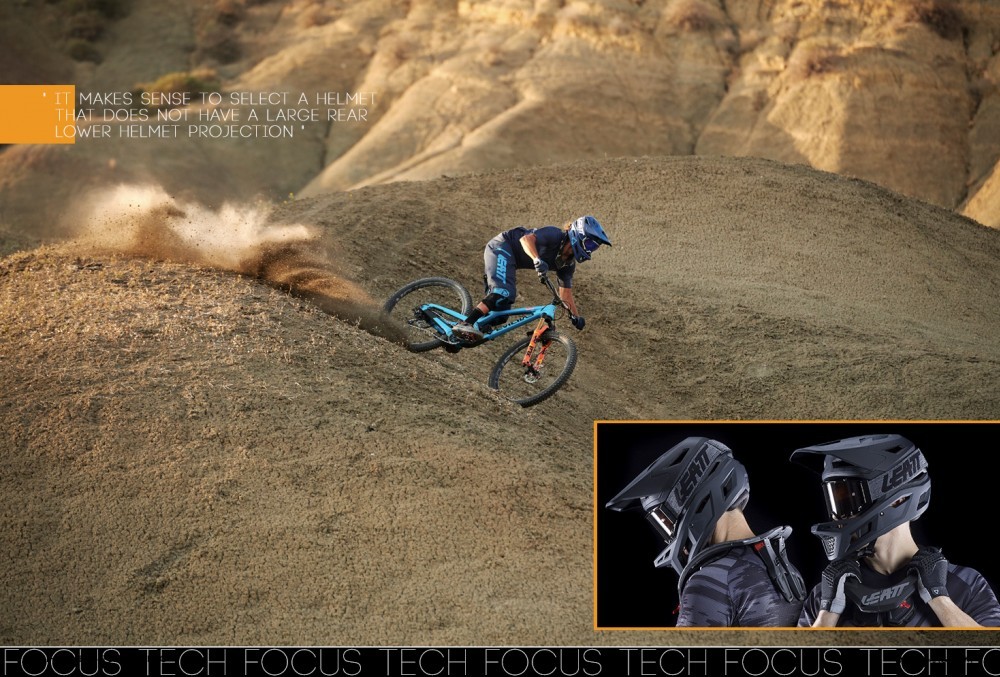 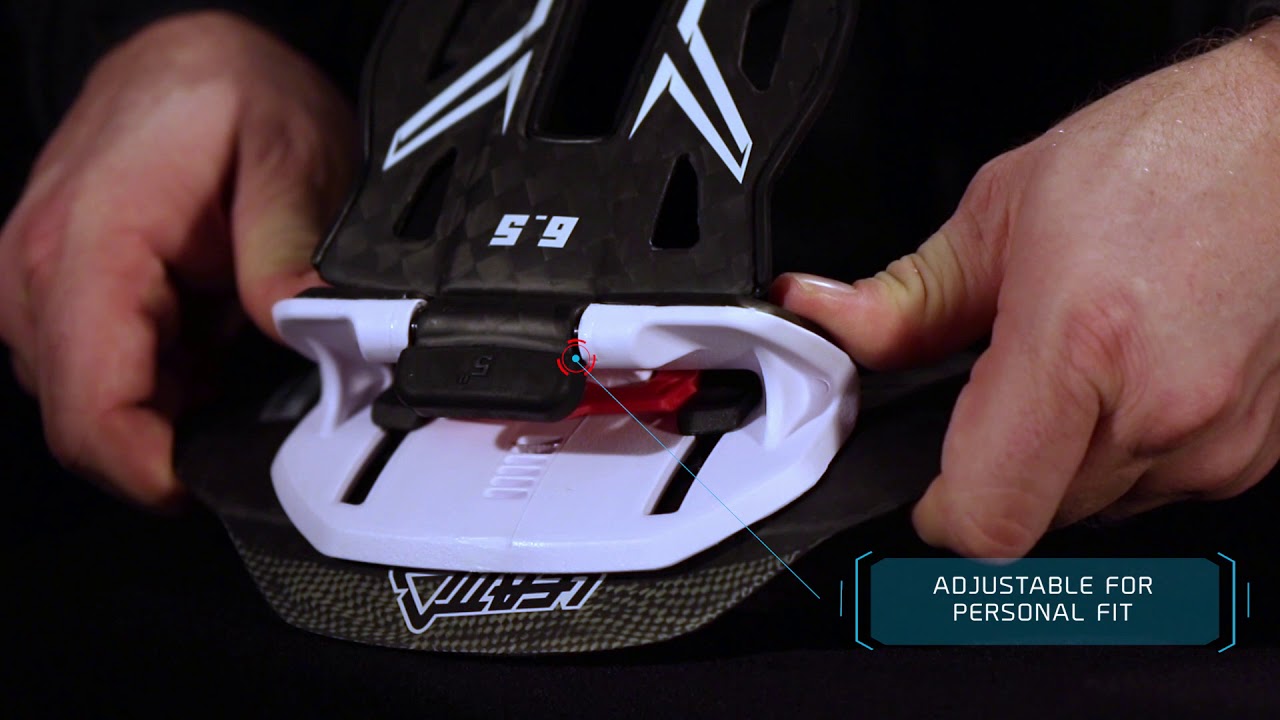 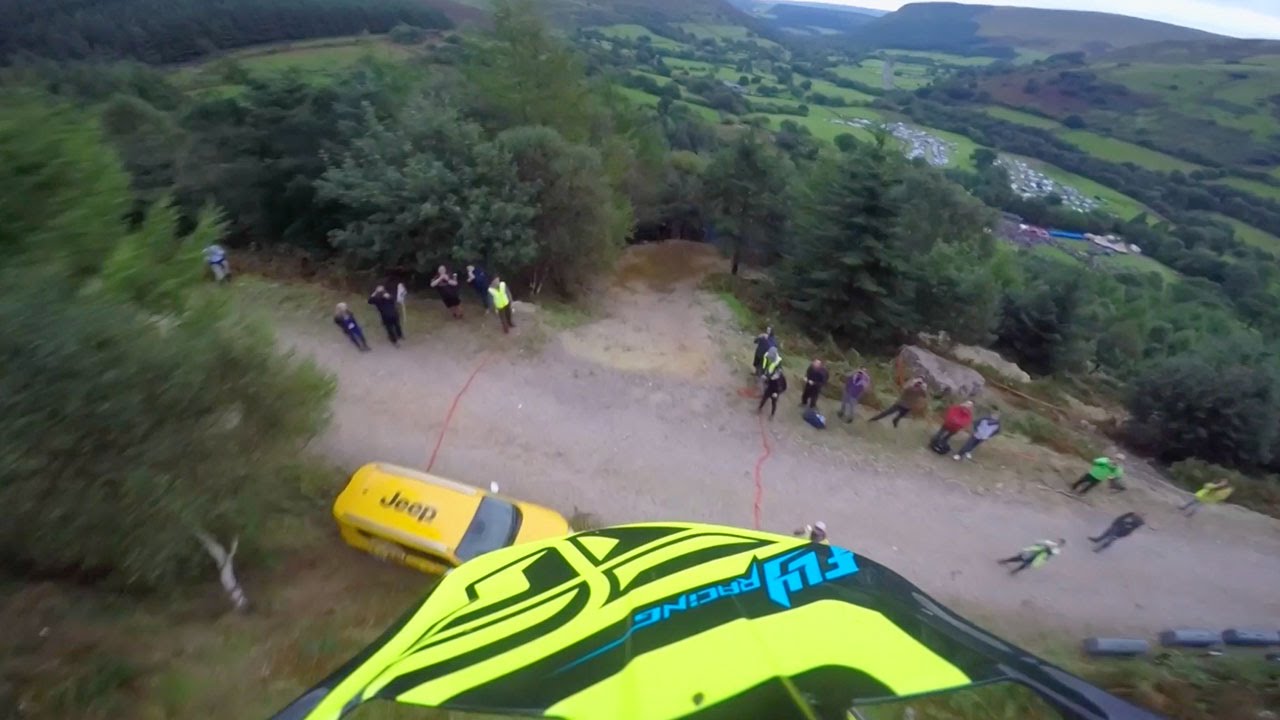 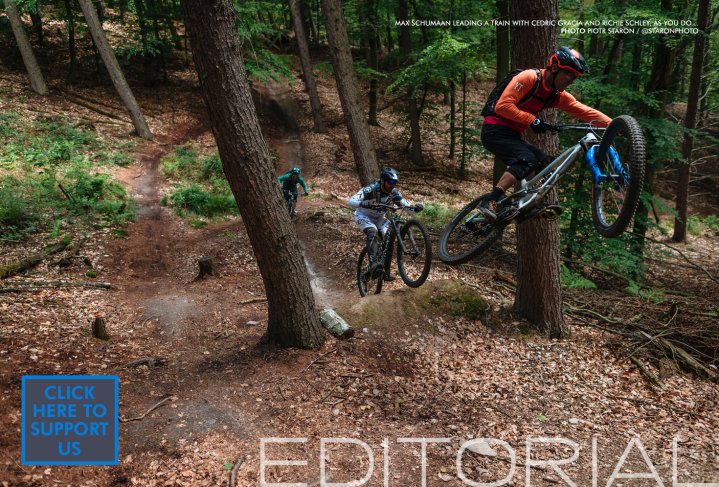 Love IMB? Find out why we need your support as Rou explains the changes going on at the magazine. 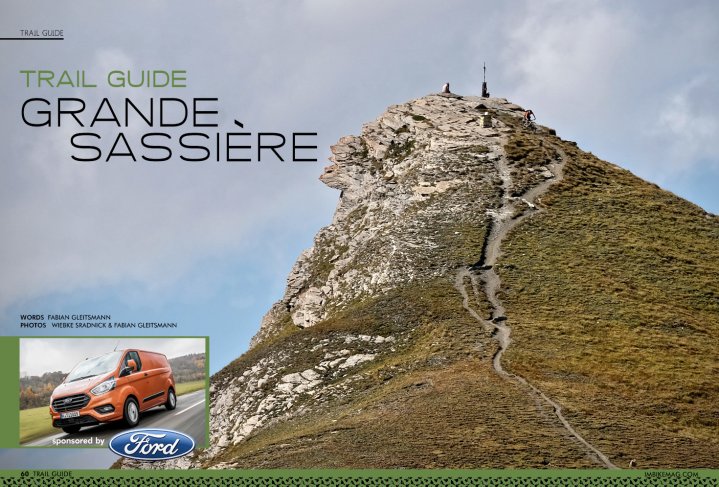 Fabian Gleitsmann aims for the Aiguille de la Grande Sassière, the highest ridable peak in the Alps but gets more than he bargained for. On the way, they take in some of the most exceptional riding in the area and eventually get to the top. 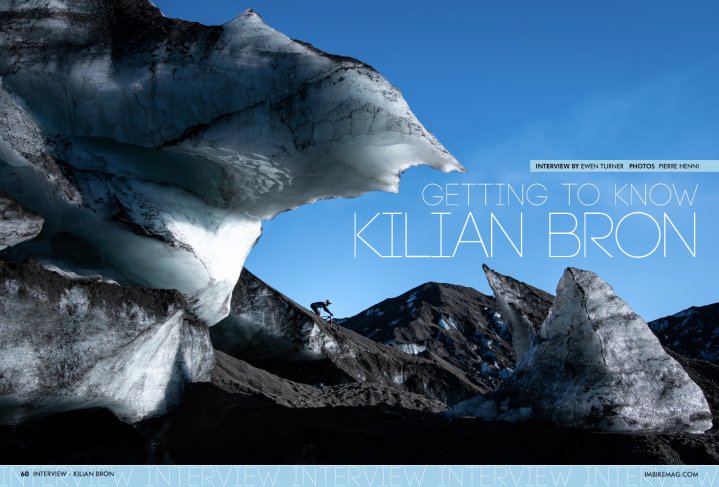 Getting To Know - Kilian Bron

Mass start snow racing specialist Kilian joins us for a chat about his riding career and why he loves this type of racing so much. With an impressive CV of racing and worldwide travel, he's certainly making a name for himself. 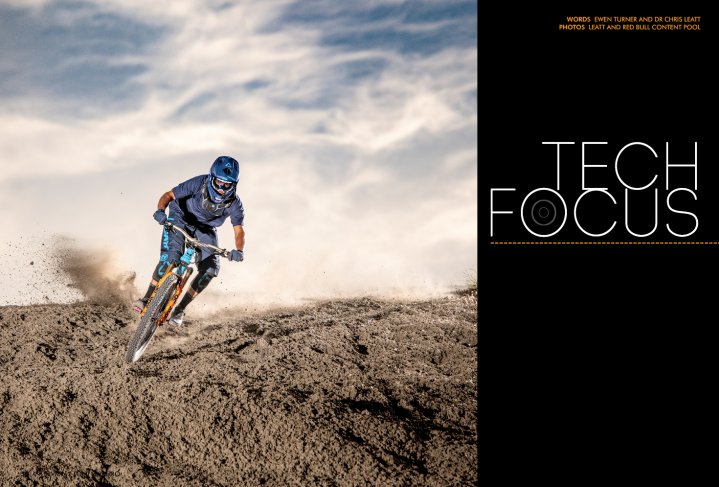 This issue we chat to Dr Chris Leatt, the man behind the neck brace to get the low down on the development of this iconic piece of kit. 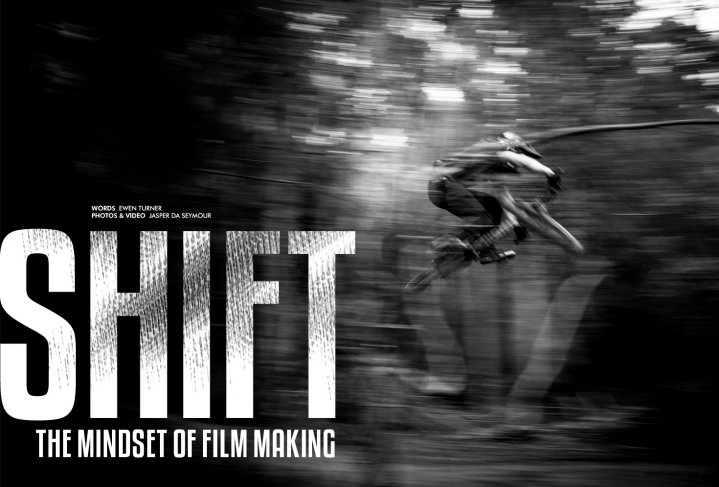 Shift The Mindset Of Film Making

Amid a seemingly endless supply of bike videos, Jasper da Seymour is attempting to offer something different to the standard' shredit'. We catch up with him and find out more about his views on the state of MTB film making and his unique approach. 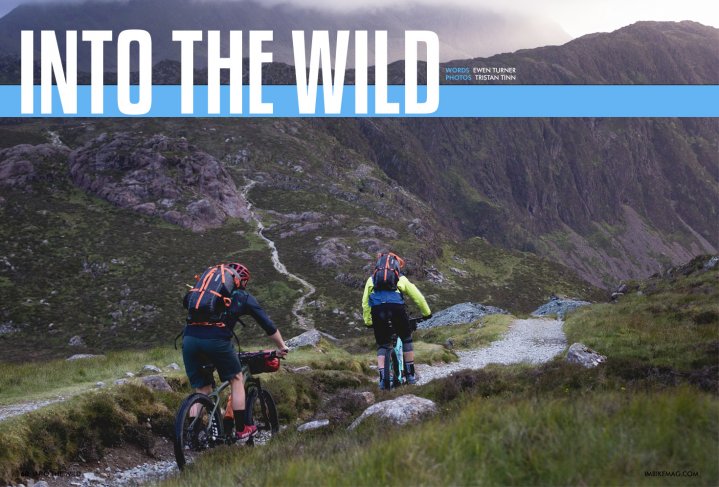 Bike Packing. It's all about beards and fat bikes, yeah? Think again as Ewen Turner heads into the wild armed only with a rucksack, penknife and an Enduro bike to see if you can still have fun on a backcountry adventure by bike. 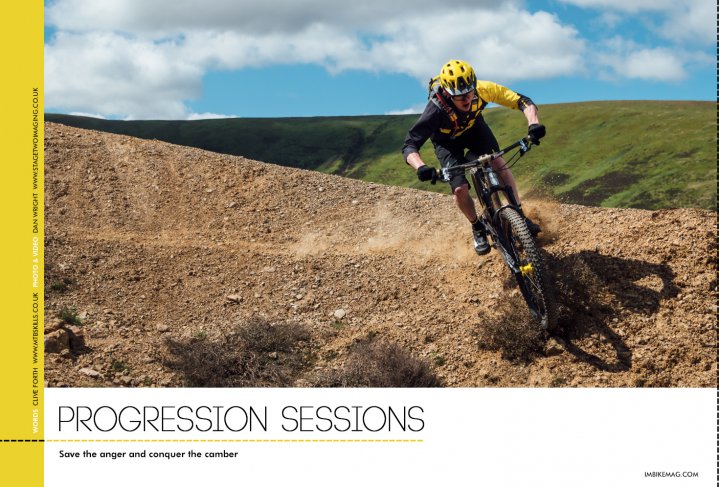 Clive Forth is back once again, this time he's looking at how camber can affect you as a rider, with the basics covered in the last few issues it's time to get a little more advanced and learn how to control the wheels as they slide and how to maximise traction on any surface! 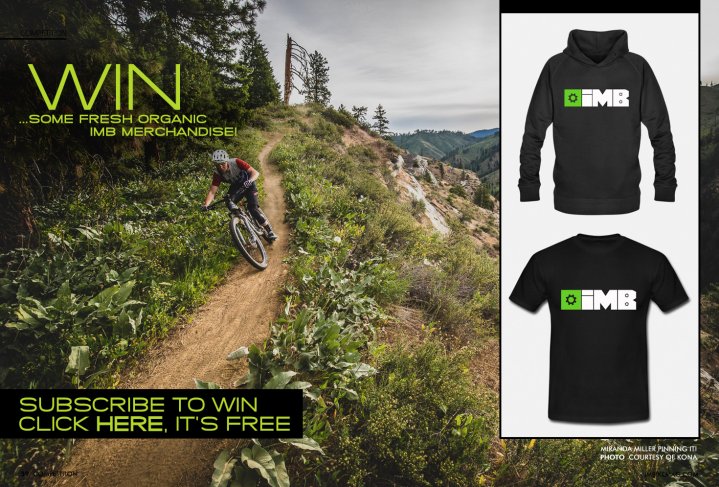 We've got a bunch of organic IMB merchandise to give away this issue. T-shirts and hoodies for one lucky winner! 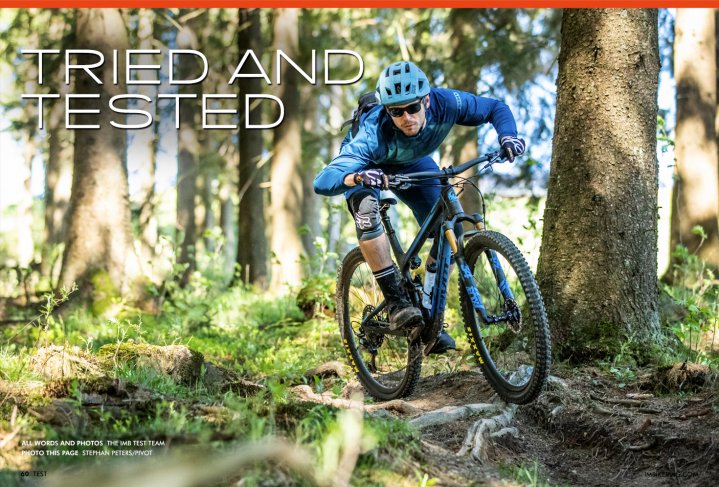 We swing a leg over Pivots rocket ship XC bike, Radon's bargain enduro rig and hit the jumps on DMRs Sect. Short travel forks from Fox, RockShox and Suntour get put through their paces alongside kit from Magura, Leatt and Ortlieb. 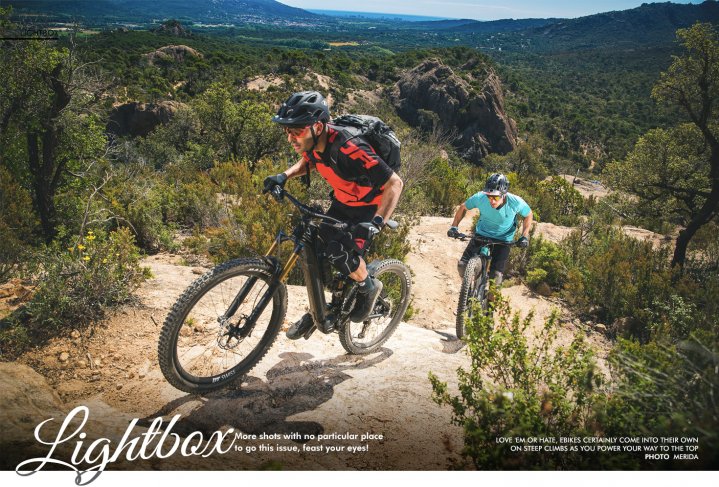 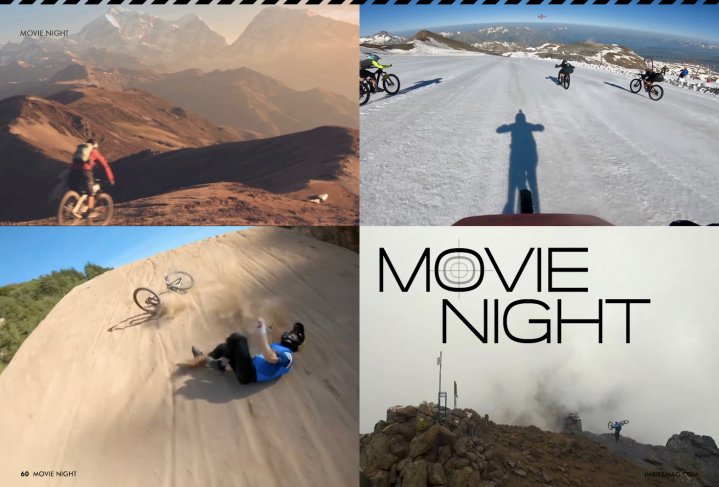