Tracy Moseley, the 2011 downhill World Cup champion and 2010 downhill World Champion, will be refocusing her racing efforts in 2012 under the T-Mo Racing banner. The Trek-sponsored rider will expand her racing calendar to include a variety of race formats next year. 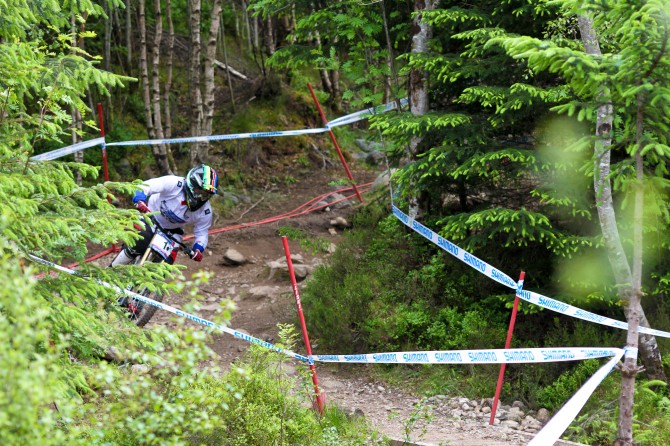 Tracy on her way to victory at Fort William in June, she dominated the World Cup events this year.

Having begun her racing career in the early 1990s, downhill became Tracy’s speciality, although she has always enjoyed mixing up her mountain biking. Going forward, Tracy will return to her multi-discipline roots and will participate in several races in 2012, including World Cup downhill events, Pro Sprint Eliminator races, and a special focus on enduros.

“After 12 years on the World Cup downhill circuit and the achievement of all the goals I set for myself, I felt that the end of 2011 was a perfect opportunity to make a change in direction and pursue some new challenges,” said Tracy.

“I would like to extend my thanks to Trek World Racing and everyone working behind the scenes at Trek for the most successful three years of my career to date. That support has allowed me to attain both a World Championship title and a World Cup title. I look forward to continuing my relationship with Trek as both an athlete and ambassador, as I pursue new ventures,” she added.

Tracy riding at the Winter Watch Park in July this year.

With support from Trek, Tracy’s new objective is to elevate her profile as an all-round mountain bike athlete. She has set goals to finish in podium positions across all of her planned races, and to gain points for World Championship selection in both cross country Pro Sprint, and downhill. She will have a variety of bikes from the Trek quiver to choose from, including a Session 9.9 and Slash, as she pursues her new aims.

“We are delighted to keep Tracy within the Trek family,” said Trek UK’s Marketing Manager Andrew Griffin. “Her successful career and outstanding reputation made furthering the relationship an easy decision to make. We look forward to supporting the shift in her racing career,” he added.

Complete details of Tracy’s 2012 calendar and full support list will be announced during the London Bike Show on January 13th.