Routine is the last thing you expect to encounter on a mountain bike film trip. But we know the routine so well in Green River after a few days we already have the breakfast menu memorized as Carlos verbally reads it to us each morning. Eventually he stops reading it aloud and some of us are simply having the usual. Time seems to slip away in the desert. 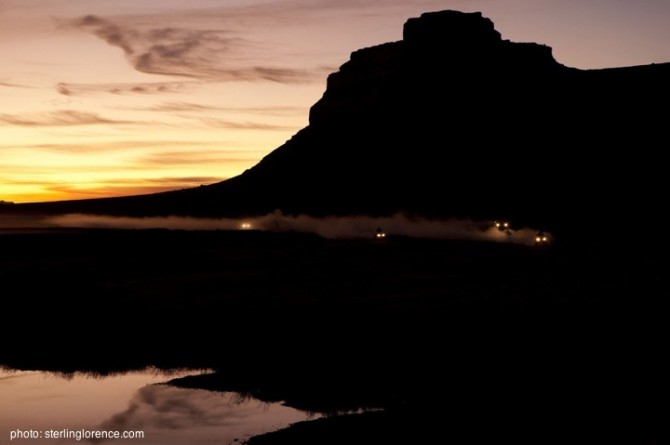 Green River, Utah is basically a modern day ghost town. It looks like it happened almost overnight once the I-70 was built to bypass the main strip through town. This is definitely one of those places people only stop if they’ve been driving too long and need some eats or a place to crash for the night. Empty streets and buildings are swallowed up by an even emptier desert stretching out in all directions. Nothing is “near” to here. Moab, the closest town worth mentioning on a map, is about an hour drive to the south. The rocky range of the San Rafael Swell runs off into the distance in the west. North of town lies what are known as the book cliffs, which just so happen to be the mother lode of freeriding terrain. This is why so many film crews have been here over the years and it’s why we’re here now.

It took us 2 days to drive here from BC. We have pickups, ATV’s, motos, shovels and picks and have been scratching away at the raw landscape with the goal of creating a progressive segment for our new film Strength in Numbers. The fact that we are even here has a sense of irony to it. We want to create a piece that will stoke people to ride and help push the sport forward but clearly very few mountain bikers will ever come to a place like Green River just to ride. Just like Alaska for skiers and snowboarders, or Jaws for surfers, these remote mesas seem reserved for the adventurous few.

Utah as a whole has shaped the face of freeriding as we know it today. All of the top riders, film crews and photographers have shot here. It’s a place with deep freeride history. Careers have been shaped and names have been made. It’s as gnarly or as safe as you want it to be. The scale is just right, not too big and not too small. Soft landings and hard lips. Ridges, ridges and more ridges everywhere you look. And the light…. clear desert skies and far away horizons are the ideal recipe for insane sunrises and sunsets daily. 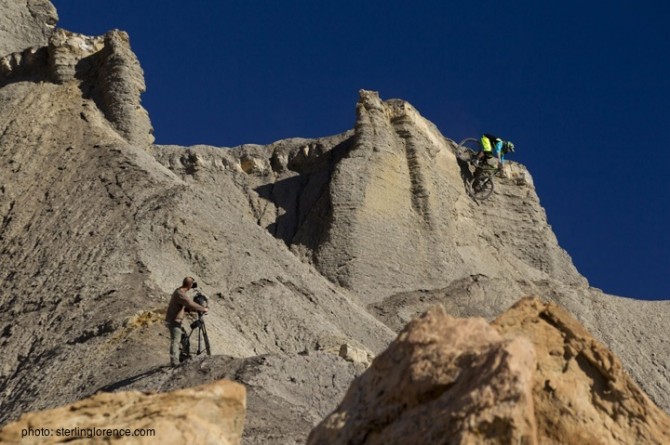 It’s all here but it’s a war of attrition to pull a seggy out of an untamed landscape. It starts with wandering and scoping for days. Lots of staring and looking at things from different angles waiting for inner creativity to flick on the lightbulb. Lips, run-ins, corners and landings are everywhere but do they line up? What unfolds over the course of days is reminiscent of the scene in A Beautiful Mind when John Nash sees the mathematical patterns in everything. To a certain extent, the same thing is happening here. A world only mountain bikers can see.

Riders have to visualize lines that have never been ridden and cross reference that with their own personal limits and that of their bikes. Is that dirt hard or soft? How steep is that? Is there enough speed or too much? Too much kick on the lip or not enough? Get it wrong and it can get ugly fast. Get it right and the sport inches ever forward. This defines freeride mountain biking and immense respect is due for the riders who excel at this process. It inspires and captures the imagination. It makes freeriding one the great communities within our world of biking. 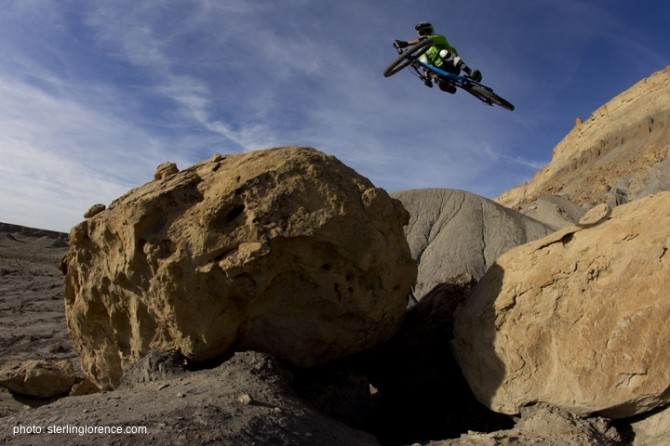 Any freerider willing to go a little deeper than the last crew and willing to look at the landscape from a fresh perspective will never run out of new lines to ride. It could be in a small valley no one has set foot in or right in the footsteps of those who have passed before. New eyes and new bikes constantly open doors in a place like this. We spent three weeks in total working a couple small areas maybe the size of a few hundred acres. With shots in the bag and bodies battered it eventually becomes time to head home. As we pull onto the highway and head north we drive for a solid hour all the while passing a-grade rideable terrain. Every two minutes someone says, “I can’t believe this is still going, it’s endless, just absolutely endless”. Eventually it does end and the landscape turns back to plain rolling hills and shrub trees but the humbling feeling remains. It’s all laying out there somewhere, waiting for the right rider to come along at the right time of day to see something no one else has.

Return To Earth | Behind The Build In Utah