Brook MacDonald has won his first World Cup race in Val d’Isere, while Aaron Gwin’s fifth place finish was enough for the Trek World Racing rider to take the overall series title! Brook qualified second on Friday and upped his pace today to take his first victory as an elite rider. 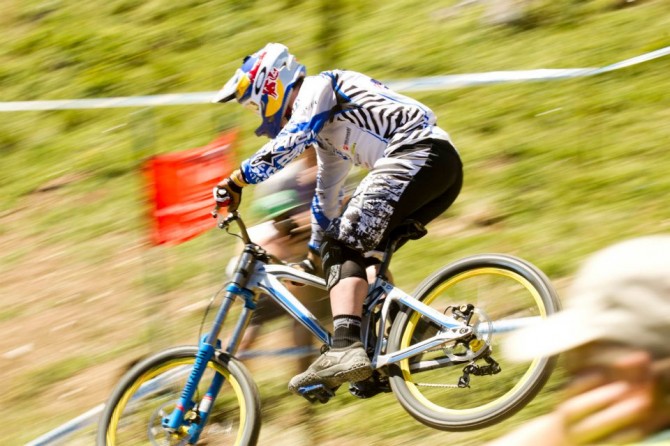 Not only was this Brook’s first win, it was the first win by a New Zealand rider, and the first time a rider other than Greg Minaar or Aaron Gwin has stepped on the top of the podium since 2010. Ahead of the race Brook had said that he loved this rough and natural track, and it certainly showed in his race run! Brook’s aggressive riding style saw him up at the second split, and he crossed the line half a second up on Gee Atherton’s time of 2:19.973.

After the race Brook said: “I can’t even explain it in words! I had a solid run and I’m over the moon about this win. I’ve had a big struggle throughout this season, but I’ve changed a few things and it’s paid off this week. This was a hard track with the high altitude and it’s only two and a half minutes long so you can’t afford to lose any time. I put it together, it was a good run and I’m so happy with it!”

This was Gee’s first World Cup race with the Union Jack on his sleeve, having won the National Champs last weekend. Gee has been on every podium at every race this season, and kept things low and fast over the opening jumps. This tactic worked with Gee up on the first split and moving into the hot seat 0.372 seconds up on Minnaar.

While the weather was nice and sunny for the race, it was a different story for qualifications on Friday with heavy storms rolling in. The bad weather and tough conditions caught out a number of top riders with punctures and big crashes, Aaron Gwin of course taking a big slam and needing five stiches in his hand, so Gwin joined a few other big names being slotted in to the top 20 start times for today.

Gwin didn’t let his injury hold him back and almost crashed into the hot seat as he crossed the line. When asked whether the cut on his hand had held him back Gwin said: “Yeah it ended up being ok. Yesterday it was pretty sore! It didn’t hurt too bad, just felt a bit weak at the bottom.”

Team Lapierre Internaional’s Loic Bruni has had an amazing season so far; leading the Junior series and claiming his first spot on the podium at the last race in Windham, every spectator trackside was cheering him on, wanting to see a repeat here today on home soil. Loic was under half a second back on Gwin’s time at the second split and giving it his all but his front wheel just caught the edge of the track and sent him over the bars as he entered the final section.

Disaster also struck his compatriot, MS Mondraker’s Damien Spagnola who had a big over the bars crash high up on the track. Nick Beer, who had qualified fifth, also had a huge crash on one of the top jumps, his bike almost sending him into a front flip as he took off.

As he left the gate Greg Minnaar knew that he had to win here today and put as much space as he could between himself and Aaron Gwin to stand a chance of taking the overall. A small dab high up cost him some time but Minnaar clawed it back to go half a second ahead of Gwin.

Minnaar may have beaten Gwin, but with Brook, Gee and his teammate Josh Bryceland finishing ahead of him, the points difference between the two wasn’t enough, and the series overall title went to Aaron Gwin for the second year running!