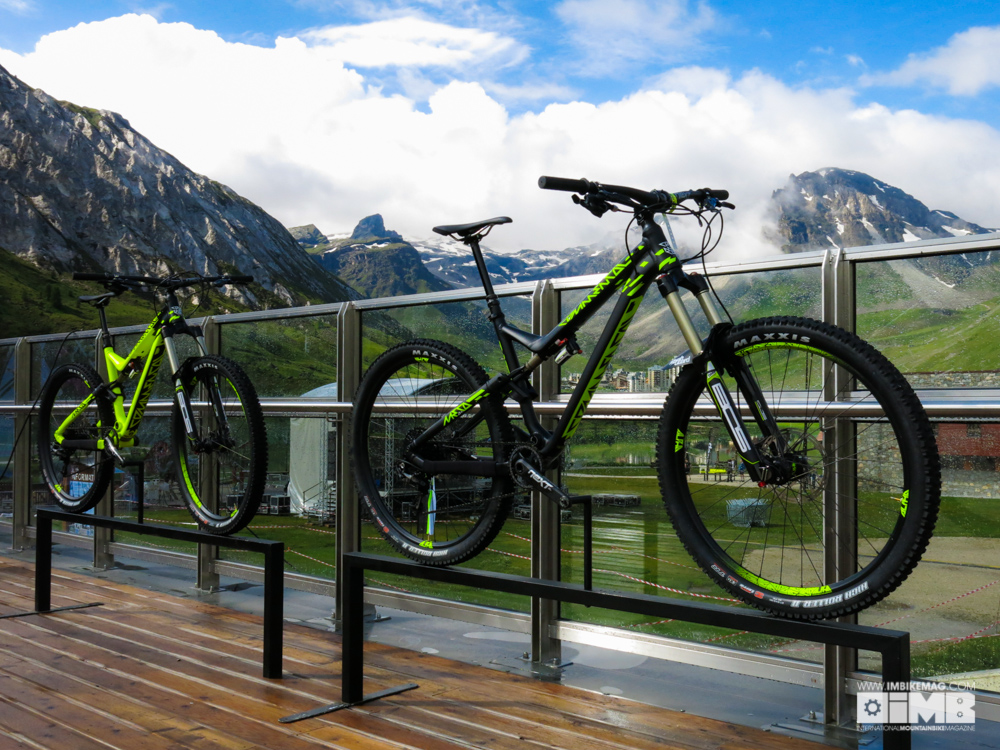 The all new Commencal Meta AM V4

2015 marks a big year for the riders from Andorra. Settled between the Alpine peaks of Tignes, in France, Max Commencal explained how his namesake brand is becoming more affordable, has a new suspension platform and will not be making carbon bikes!

The main focal point for the 2015 range is the fourth incarnation of the Meta platform, the new Meta V4, which will be seen on two distinct models, the 150mm Meta AM V4 and the 120mm Meta Trail V4 and will account for 50% of their bikes sales for the new season.

After extensive back-to-back testing with 26”, 650b and 29”, 650b was chosen as the optimal wheel size for the V4 across all terrain. This is twinned with a more progressive suspension than its predecessor, the V3, running slightly firmer in the sag, in order to improve pedaling efficiency and grip. The BB drop has been increased to improve geometry and higher pivot point optimizes the wheel path.

There will be four variations of each model:
Origin – This is the base model that offers a solid and reliable build with the ability to upgrade in time.
Essential – The next level up sees a bike that is ready to start racing on, with a general upgrade in parts across the board.
Race – As the name suggests, this top of the range model is everything you could want to race on, straight out of the box.
A la carte, – This is Commencal’s custom build option, where you can choose from a wide variety of components to build up your chosen bike and in what may well be a first, you can even exclude components! If you already have wheels, or forks etc, then you can simply click not to add those to your build. You then have the option to have the bike fully assembled in France by World Cup mechanics (for €150), or have it shipped in parts directly to you. 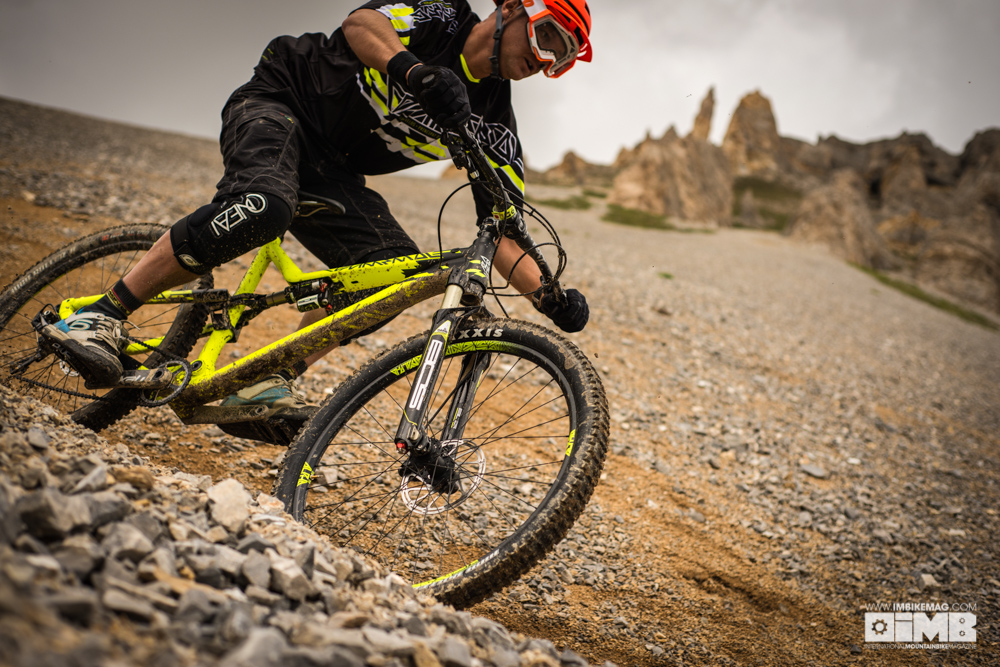 The AM is Commencal’s enduro bike and is a model that the whole company is deeply behind, Max truly believes that this is one bike to do everything on and having spent several days downhilling and trail riding in the Alps, he isn’t far off. For big mountain riding, whatever the direction, I never really felt like I was on the wrong bike!

At 6.6lbs without the shock, the frame has shed weight when compared to the V3, it’s not as light as other on the market, which they acknowledge, but as a brand they have decided to go for strength and reliability over weight. 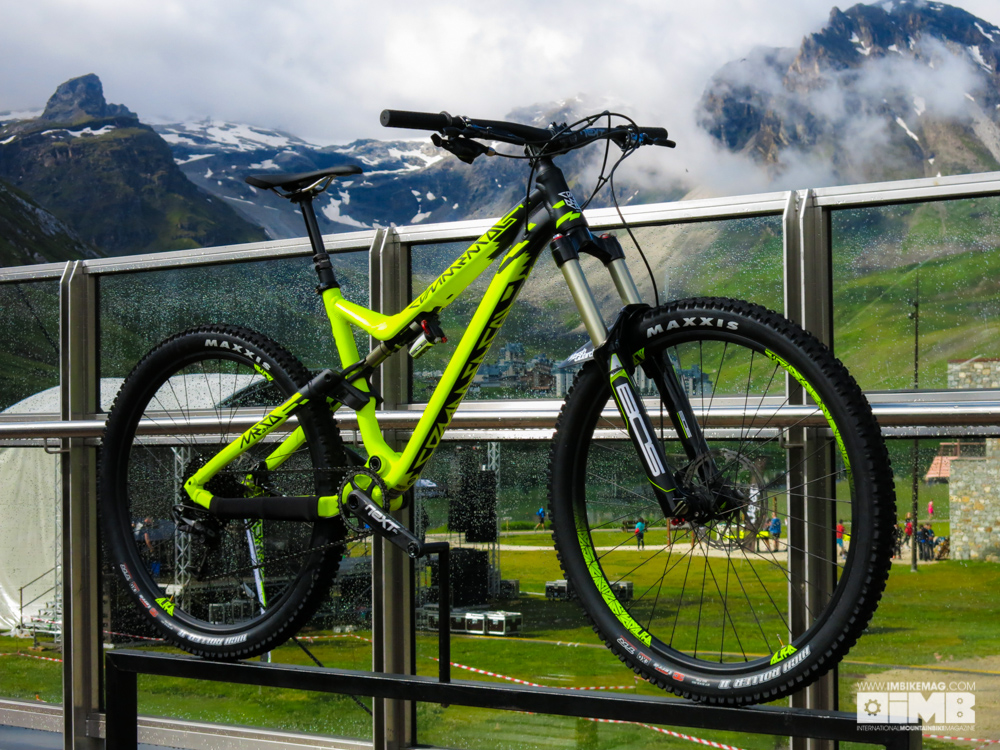 The bike comes in two colours, Commencal Yellow and Black, or the stealthy Black and Yellow reverse colour scheme.

The bike itself has 650b wheels and a 66-degree head angle (with a 150mm fork) and is designed around a 50 or 60mm stem, as apposed to the growing number of bikes designed around 30mm or shorter stems. It is their belief that by lengthening the top tube to run a smaller stem, you would loose comfort and manoeuvrability.

As most riders will be running the AM with a 1x set up, they have gone for clean lines rather than having a front derailleur mount on the frame, but an adaptor has been made to give you the option should you want it. 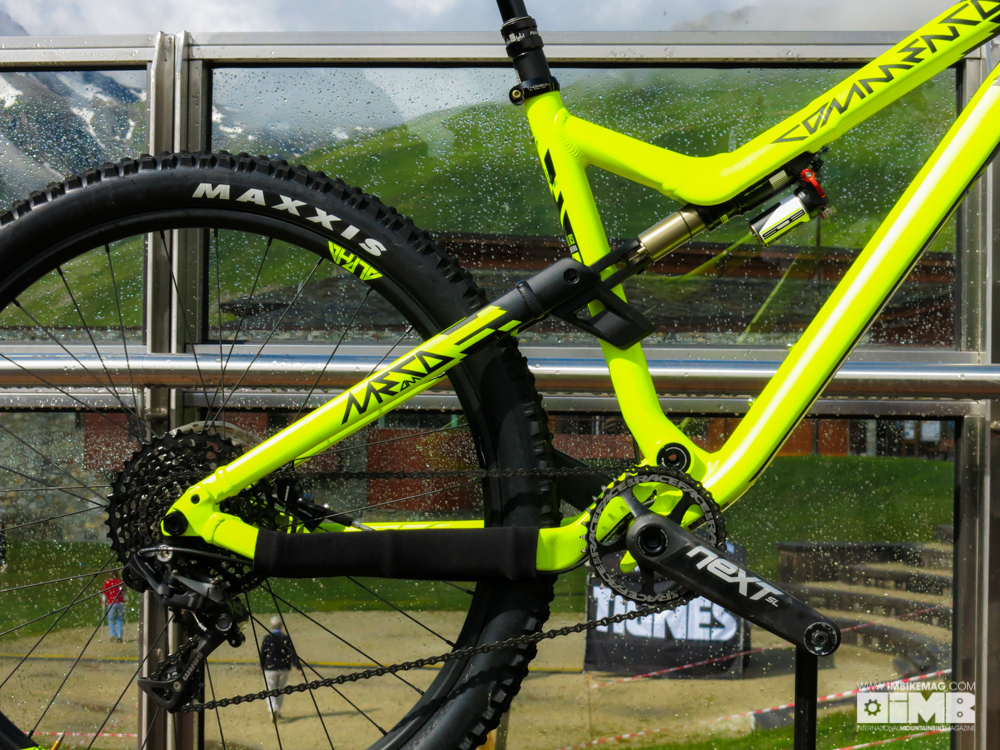 The all new rear end “Contact System” suspension set up. 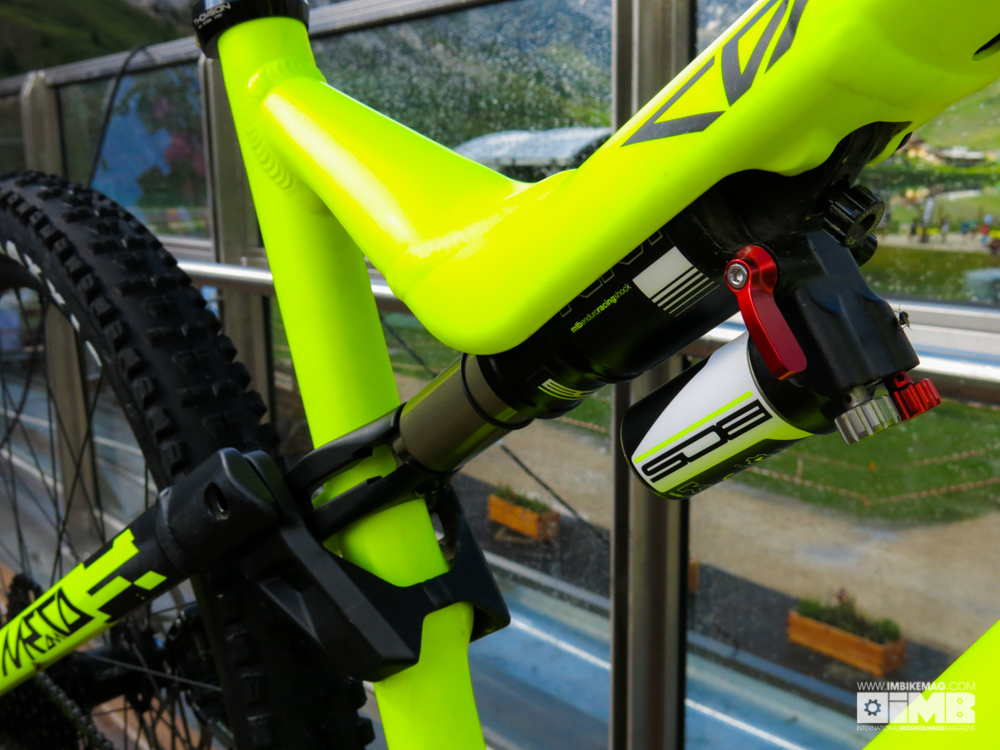 The new set up allows easier access to the shock and there is room for piggy back style shocks too. 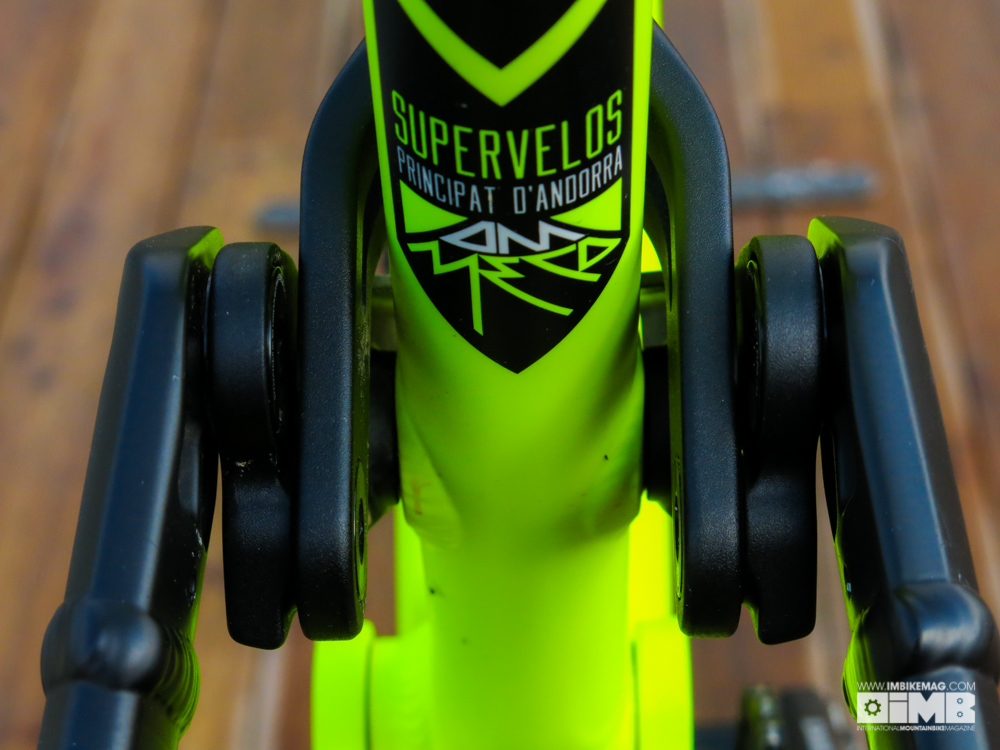 The shock is assembled on a clevis and features bearings to offer improved sensitivity.

Looking like a scaled down version of the AM, the Trail V4 has the same split top tube V4 suspension platform, but with 120mm of travel and a 67 degree head angle. 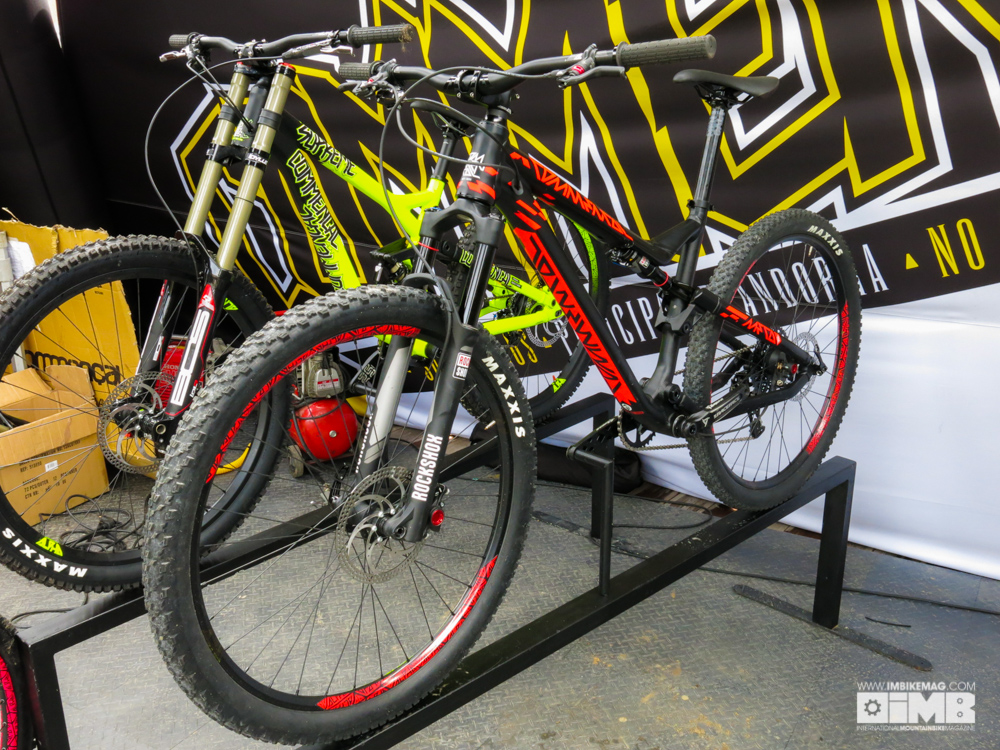 Unfortunately we didn’t have time to ride the Trail V4, but if it’s anything like the AM, then it should make a very lively and fun trail bike. 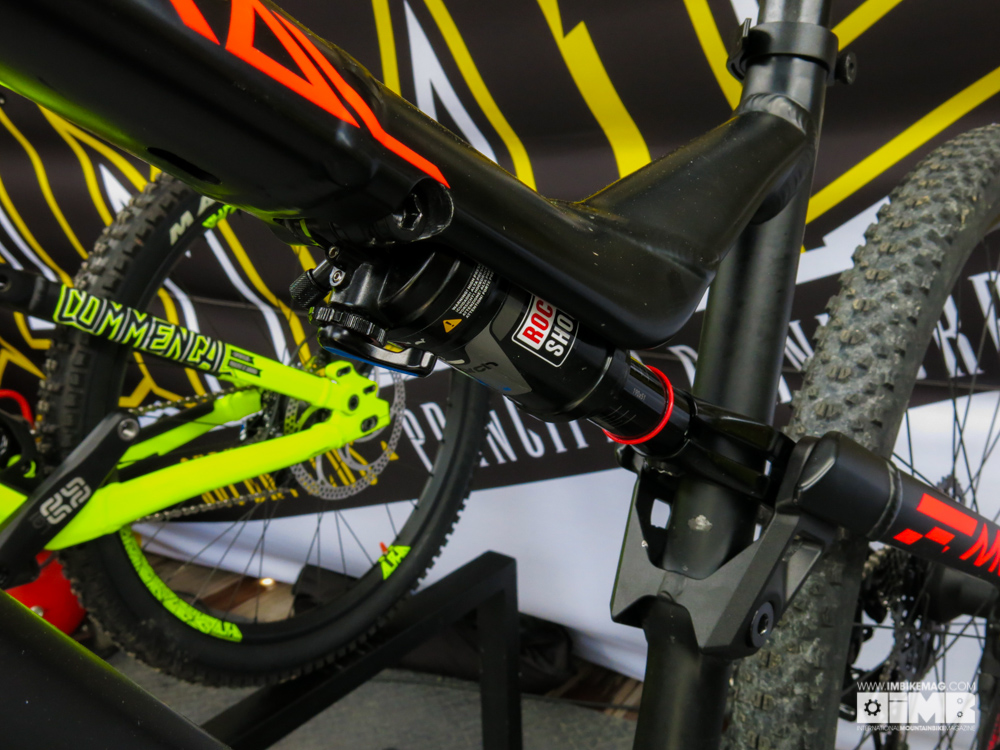 The shock “hood” is a feature on the V4 system.

Other models in the range that caught our eyes were:

Who doesn’t like a hardtail that can take some stick? The Meta HT AM is Commencal’s take on an aggressive hardtail version of the Meta AM V4 and is available at two price points, with 150mm Marzocchi 350 R, or RockShox Revelation forks and a 2×9 or 2×10 drive train. 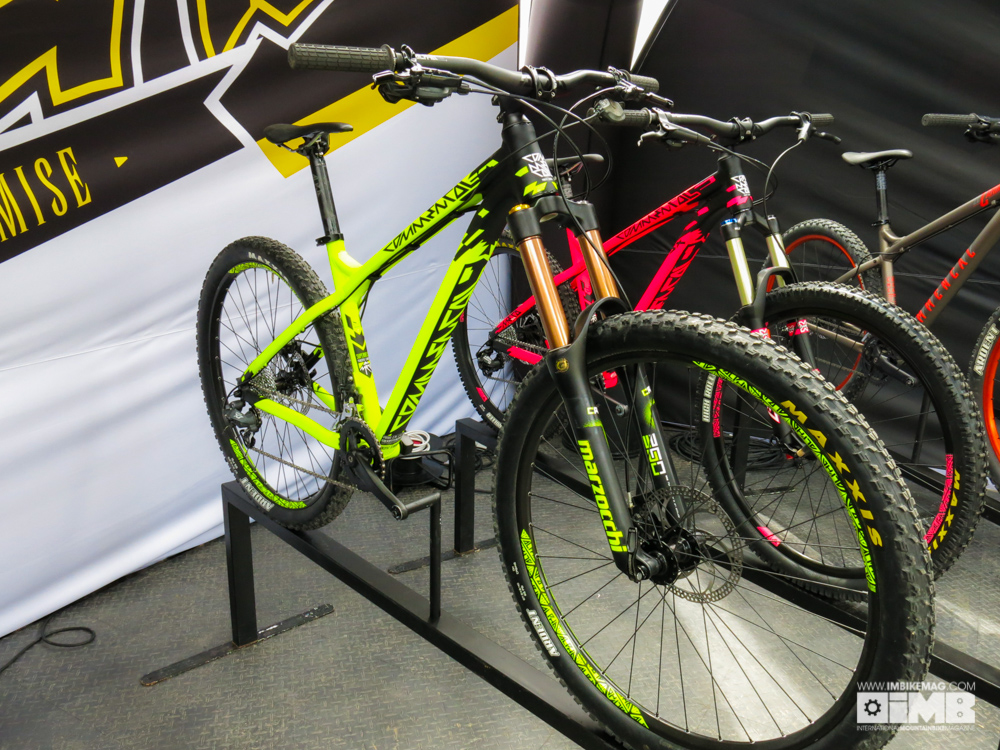 Affordable and fun, thats the goal with the Meta HT AM! 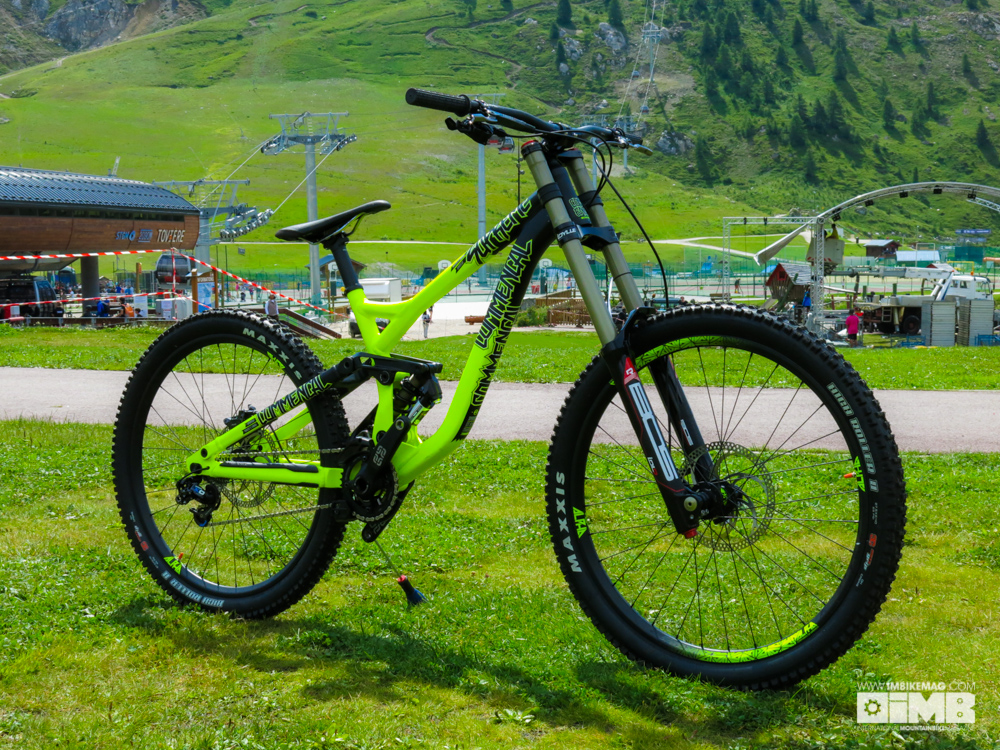 Bigger wheels for the Supreme DH 650b, there is also a park version with freeride in mind sporting 26 inch wheels.

You can’t talk about the Commencal range without mentioning their amazing children’s bikes! Proper downhill, trail and jump bikes available across three ranges:

Ramones: 12-14” wheels including balance bikes with disc brakes!
Meta HT: scaled down versions of the adult’s bikes in 20” and 24” wheels with decent geometry.
Supreme: 20” and 24” full sus bikes that are capable of hitting the bike parks. 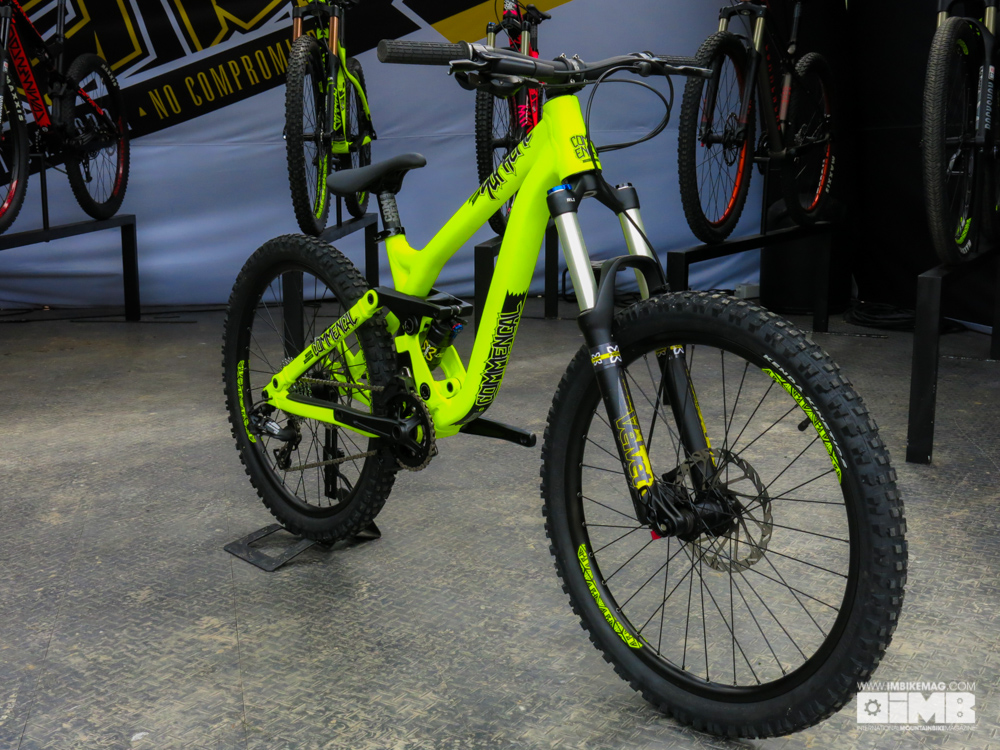 This thing almost, and I stress almost, makes me want to have kids!

Having seen video evidence of what these bikes are capable of I must admit I am a little worried about getting schooled by a 6 year old! 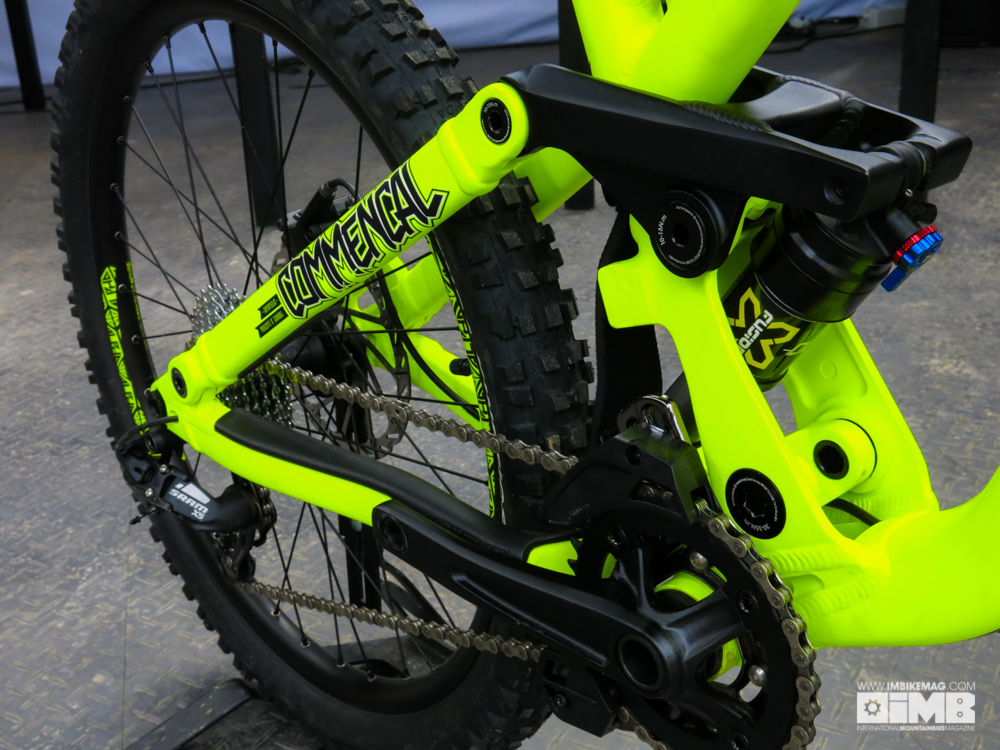 There aren’t many bike brands out there offering this kind of tech on mini machines!

You may have noticed that the 650b wheels have arrived, but there’s no carbon, a big omission from the range when compared to other brands out there, but there is a reason. After visiting various factories in China, Max Commencal decided that for ethical reasons, they wouldn’t offer carbon, even if it were advantageous for the bikes.

“I won’t do carbon any more, as I am not happy with the ethical conditions that carbon frames are made in, in order to get the right price point, we won’t kill people to make frames” Max Commencal. 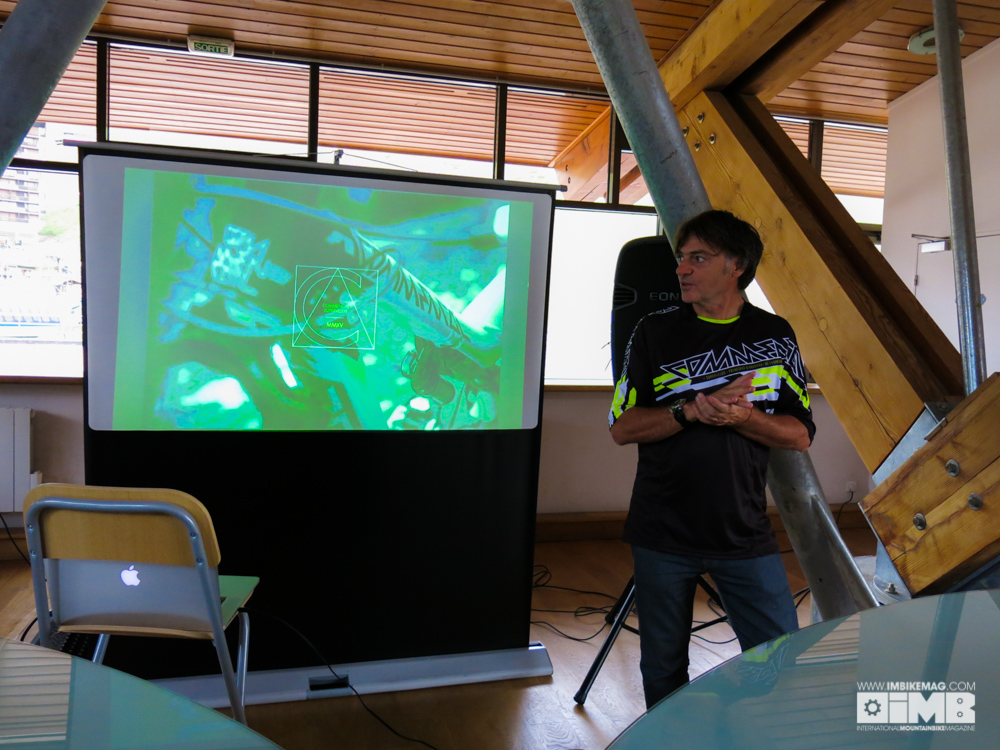 Having visited the carbon factories in China, Max was convinced this wasn’t the way to go. Poor working conditions and unhealthy materials don’t sit well with the brand.

For 2015 Commencal are concentrating on direct distribution, to allow them to compete with direct brands and offer a more competitive price to its customers.

Commencal will still have dealers, but they will no longer be going through distributors in Europe and they will be starting Commencal USA very shortly. This means if customers have any queries about the bikes, they will be directly in touch with the guys that helped develop them. 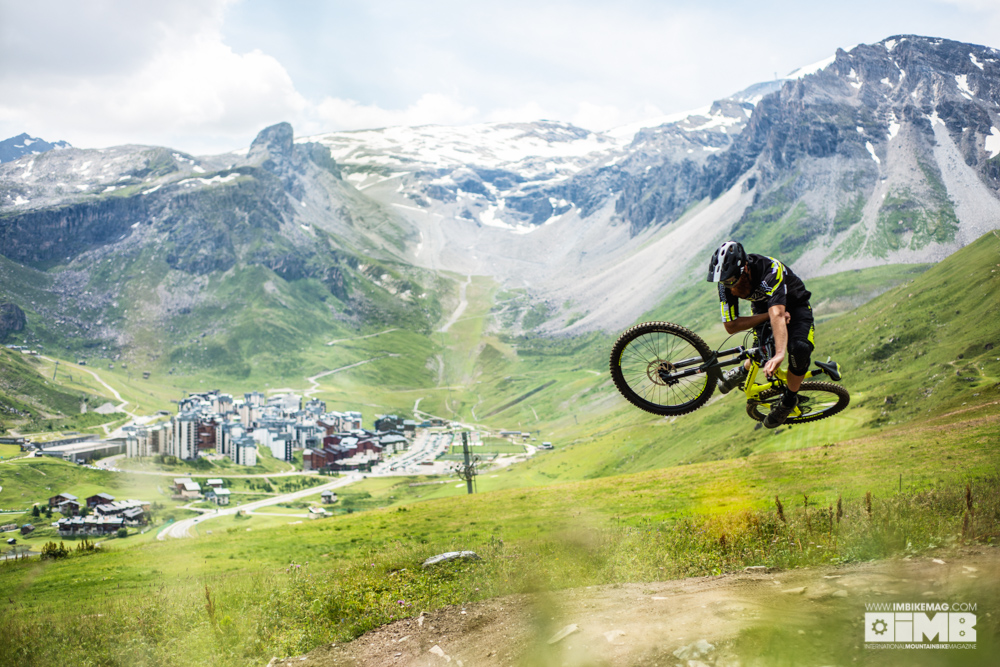 Pierre Edouard Ferry made us look quite insignificant in the bike park. Tignes was phenomenal! – Photo: Sam Decout

Commencal are big advocates of bike parks, with partnerships with Vallnord, Tignes, Val desire and L’Alpe d’Huez, according to Max, the fact that you can have maximum fun with minimal suffering makes them amazing, they can only be good for cycling. For that reason they support the parks in order to support cycling. It is thanks to these partnerships that we were able to put the Meta AM V4 through its paces in Tignes, which you can read all about in issue 31.

A Big Thank You

During the press camp we were treated exceptionally well not only by all the team at Commencal but also the crew from Tignes and Val d’Isere. If you’ve never ridden here then put it on your map. Both the bike parks are linked, so you can ride from one to the other on some of the best trails I have ridden in a long time. The lift pass is FREE, yes you read that right, if you stay in the resort you get a free pass for the lifts! In addition, all the other activities in the villages are free too (except golf and another random one that escapes me). You’d be forgiven for thinking there wasn’t much to ride if they are giving it away, but you’d be wrong. Max Higel has been working very hard here for a very long time and has created an amazing set of trails. He and his team have been toiling away and the fruits of their labour are really something to behold. 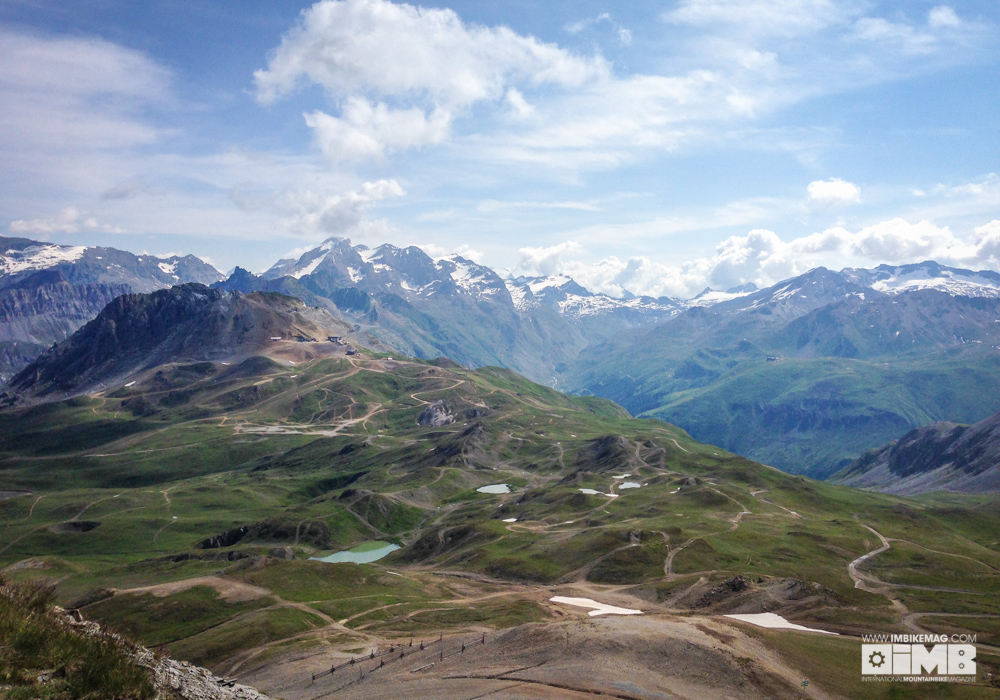 Despite being pretty unlucky with the weather before we arrived the trails were running sublimely, even after a night of torrential rain they had drained well and by the afternoon it was hard going to find a puddle. They are kept in excellent condition by a team of 12 full time trail builders, organised by Max, we absolutely loved it and will be back for a full trail guide next year. It’s a short bike season, July and August, but there is still time to get over there and check it out if you want to see for yourselves! In two days we rode over 25 miles of trails, Max reckoned we had barely scratched the surface and at best had covered about 20% of what the area has to offer. 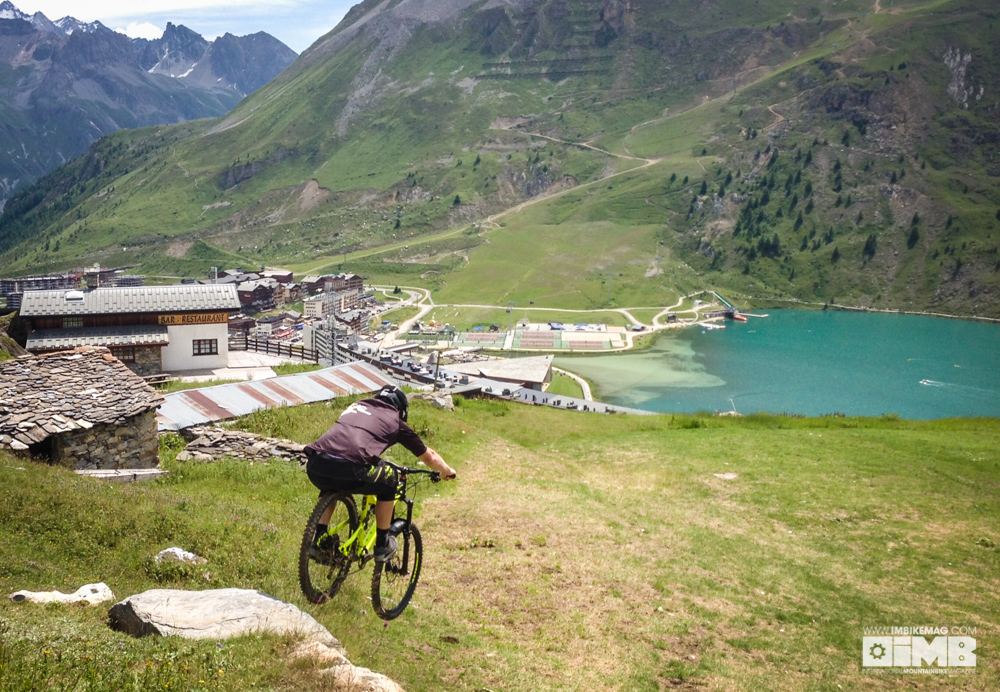 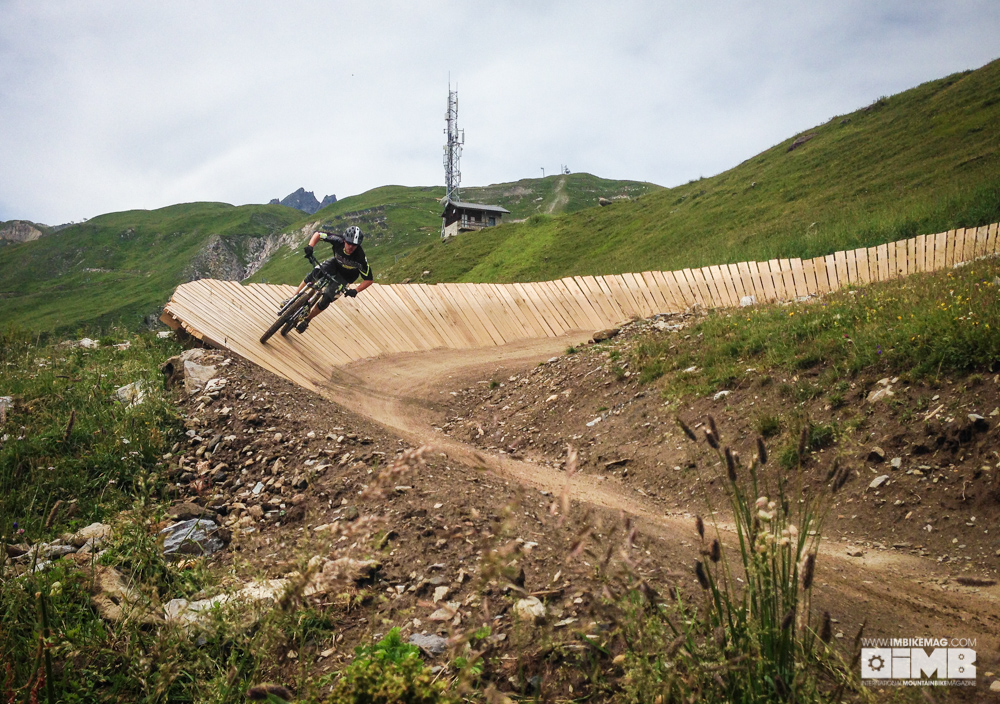 Commencal Celebrate 20 Years With The XX Edition Meta AM 29