Day two of the Trans-Savoie provided riders with a huge challenge because of the weather, but in return they were rewarded with almost 5,500m of descending, that doesn’t sound too bad to us!

Double-check the statistics for Day Two – it’s not a mistake, there was almost 5,500m of timed descending on the clock. The threatening weather couldn’t make up made up its mind today, so most of the stages were pretty wet, even if you got lucky enough that it wasn’t actually raining during each of your runs. But in the end, no one could escape the downpour as the day’s racing came to slippery, muddy conclusion. 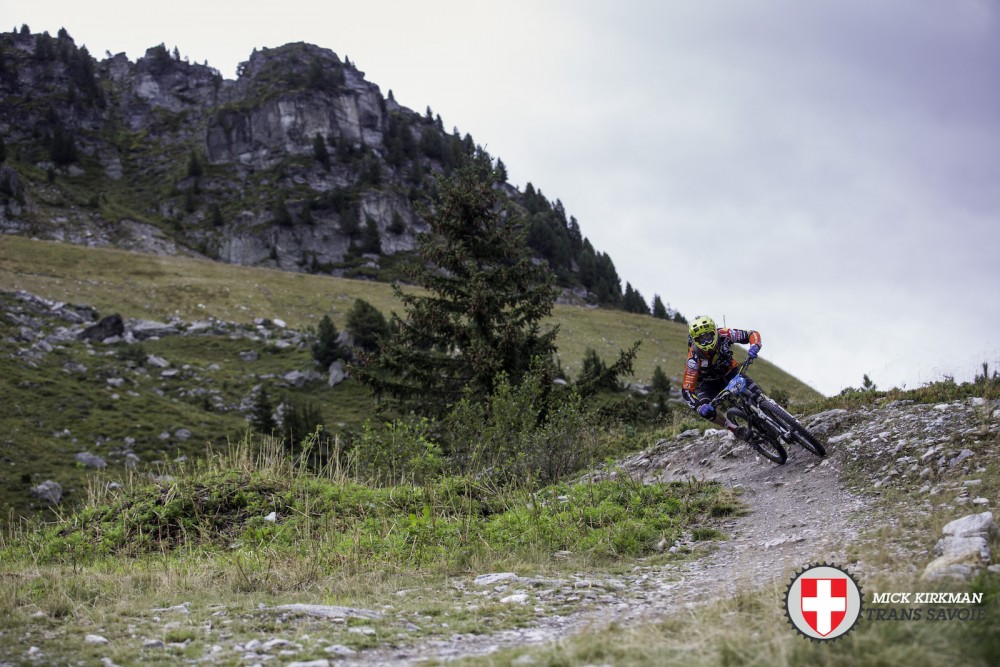 Les Arcs is served by a fast funicular (mountain tramway) that rises almost 1,000m from the valley floor at Bourg St Maurice up to the ski resort at Les Arcs 1600. It takes only ten minutes and then another chair lift to get some serious height, so Trans-Savoie Day Two started with a super-technical, hand and forearm-mangling 1,400m timed descent. “Double Shredder” was already given a technical rating of 6, and the wet weather just took it to the next level. Half way down, riders got some encouragement from Monkey Man and his horn if they were flagging. 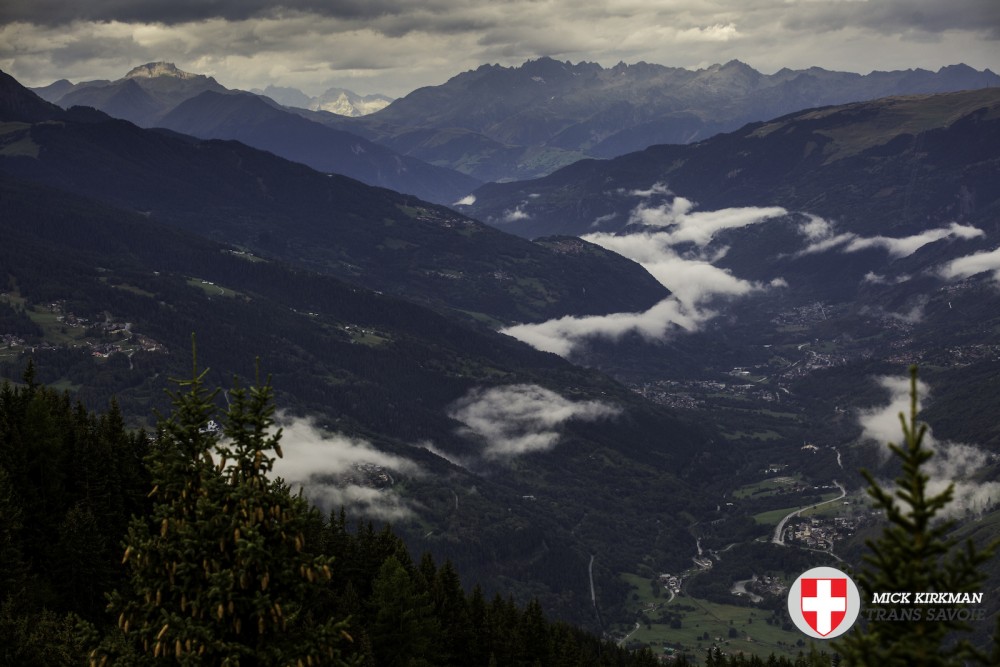 The whole of Day Two’s area is home turf for Trail Addiction, the holiday and guiding business that spawned the race, and Trans-Savoie benefits from nearly 15 years of knowledge of all the best trails and routes nearby. Making the most of the lifts to maximise downhill time, the morning rounded off with another ride up the funicular before traversing over to Vallandry for the T-S remixed version of the classic greasy, knobbly black graded “Elle Chablatte”. 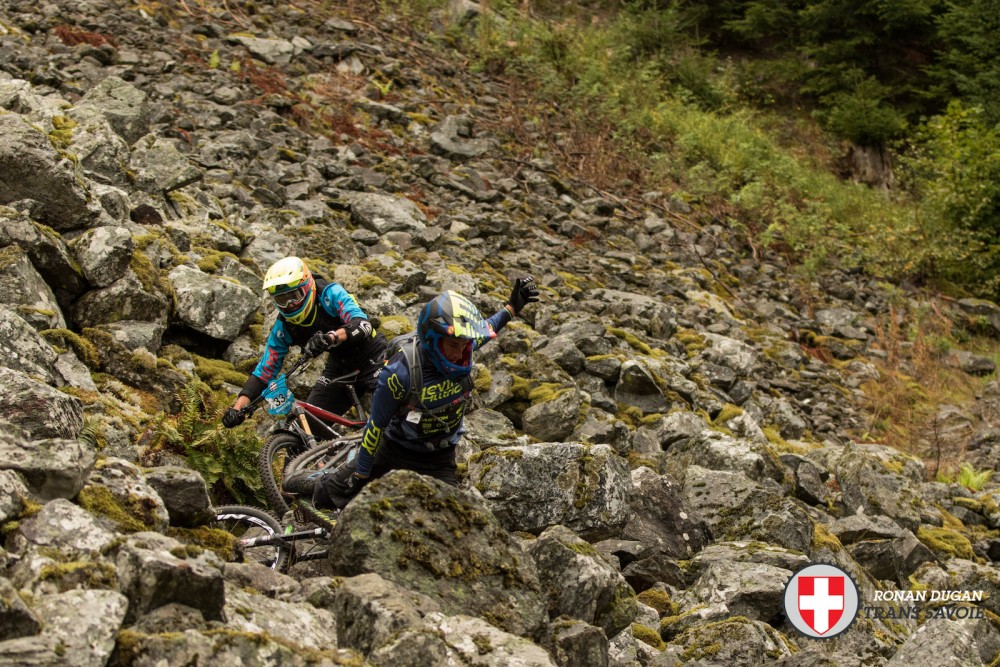 Lunch in Vallandry refuelled riders and briefly relieved any arm pump before heading back up to the relentlessly steep, twisting, brake melting “Axe Wound” trail. Hand cut and finished in places by a local resident who clearly has a past life as a master trail builder, it’s been shaped to encourage bikers away from the hikers in the valley. This ex-trials rider has crafted a gem of a trial with 850m-drop along some of the steepest, rootiest lines in the region…some riders found it pretty hardcore in the damp, slippery conditions, some just ducked trees and got on with it. 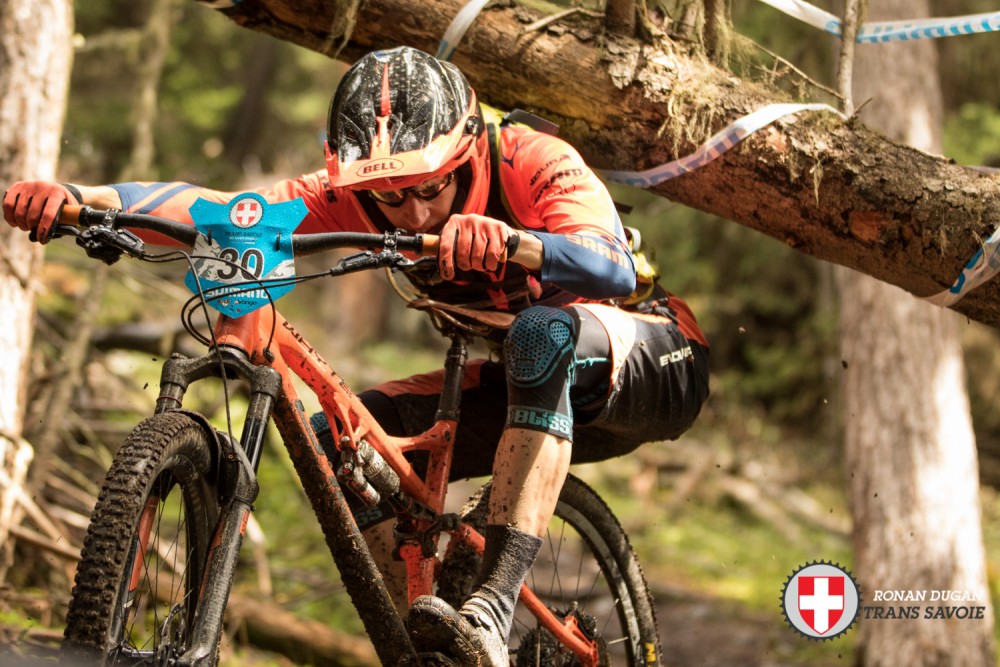 The next two stages were over on the La Plagne side of the hill, accessed by the huge Vanoise Express cable car that hangs high on a wire 1km high across the valley from Vallandry. The lift is a result of all the cash that skiing in the winter brings to the region, and has opened up an easier to access network of trails in the La Plagne side in recent years. 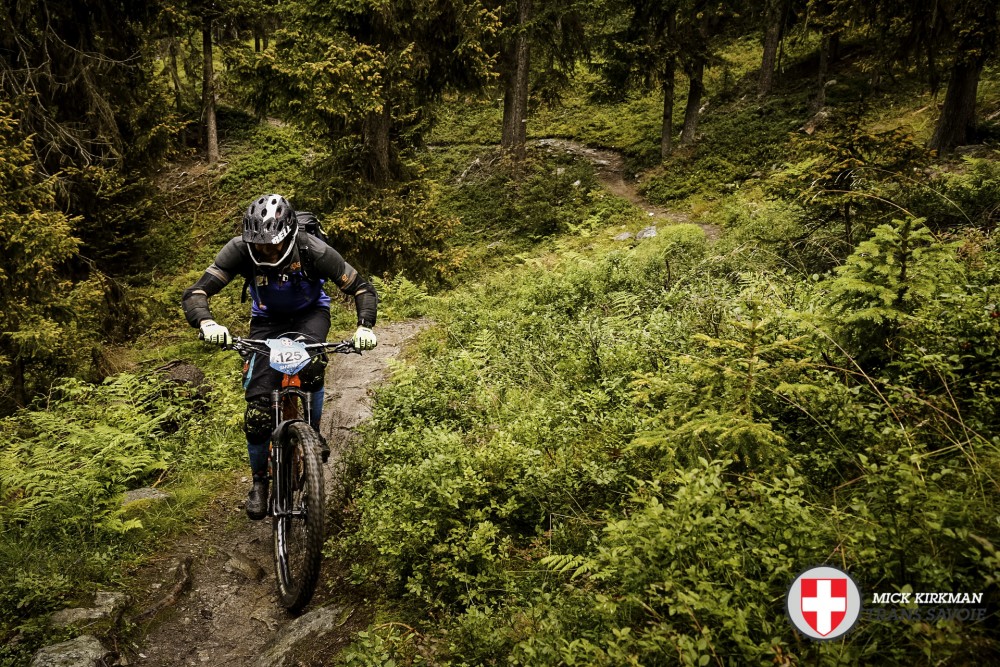 These include the 550m “Champion’s Method”, slippy today but which usually delivers prime time forest shredding and loam, and “Gold Rush” named after a great guy and competitor from Year One we like to remember called Brian Goldsworthy, who sadly is no longer with us. 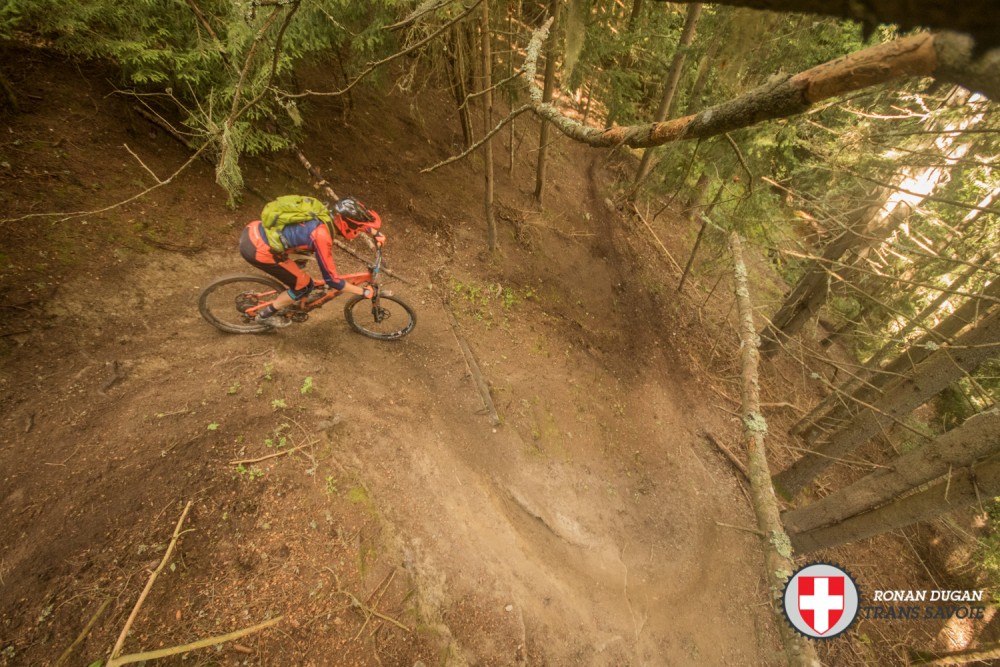 Once down at Landry, over 4,000m of descending on rock, root, loam, gravel, berms, drops, jumps and every other kind of terrain had been ticked off and most sensible people might have called it a day. Trans-Savoie pushed another button though, and the competitors took a final lift up the mountain to end the day on another black graded trail from Les Arcs. This former footpath has been added to the bike park map, and although it’s now an official graded and maintained trail, it’s still a very natural feeling track that added another final 850m of descent to the day. More bikes and bodies are showing signs of wear and tear, but epic tales, memories and stories are building friendships across competitors from 22 countries.

See you tomorrow when the weather forecast looks better.