Ragley is back! After a short break they are back with a full range of bikes and have lost none of their hardtail swagger. With a range of models in both aluminium and steel, Ragley has all the bases covered with a hardtail for everyone. The Blue Pig, Piglet, and Big Wig represent the steel side of the family, each with an aluminium counterpart if that's more your thing. Early adopters of the long and slack mantra, Ragley have been pushing boundaries since they began and it looks like the latest range is no exception.

Here we have the Big Wig, Ragley’s steel, 130mm forked, 29er. As expected the numbers add up to something fairly typical of a hardcore hardtail from a British brand, but not quite as wild as you might expect. Starting up the front we have 65 degree head angle onto which is strapped the 130mm fork, which in this case is a RockShox Revelation. The reach numbers are conservative for a brand such as Ragley and the XL comes in at 480mm - roomy, but not long. The back end is a classic 435mm on the chainstay and is neither short nor long. Ragley has steepened the seat tube slightly, but again in a rather conservative way to 74 degrees.  Standover height is good, and with short seat tubes, sizing up is always an option. What is more progressive on the Big Wig is the wild 65mm bottom bracket drop, which certainly suggests there will be stability at speed!

The spec is considered, but perhaps not overly exciting. Ragley only offers one model in the Big Wig, otherwise you'll be looking at the Big Al to save some money. The aforementioned fork is a Revelation, the whole bike rolls on Raceface AR 30 rims matched with WTB Vigilante and Trail Boss tyres in 2.5 and 2.4 inches respectively. They are both Tough casings, which are good to see on a hardtail of this style. The Drivetrain is SLX throughout as are the brakes, which is solid workhorse kit. A 150mm Brand-X dropper with new improved lever does the seat moving duties and the rest of the bike is finished in Ragley’s own brand kit which is functional, but lacks the finesse found in the frame. 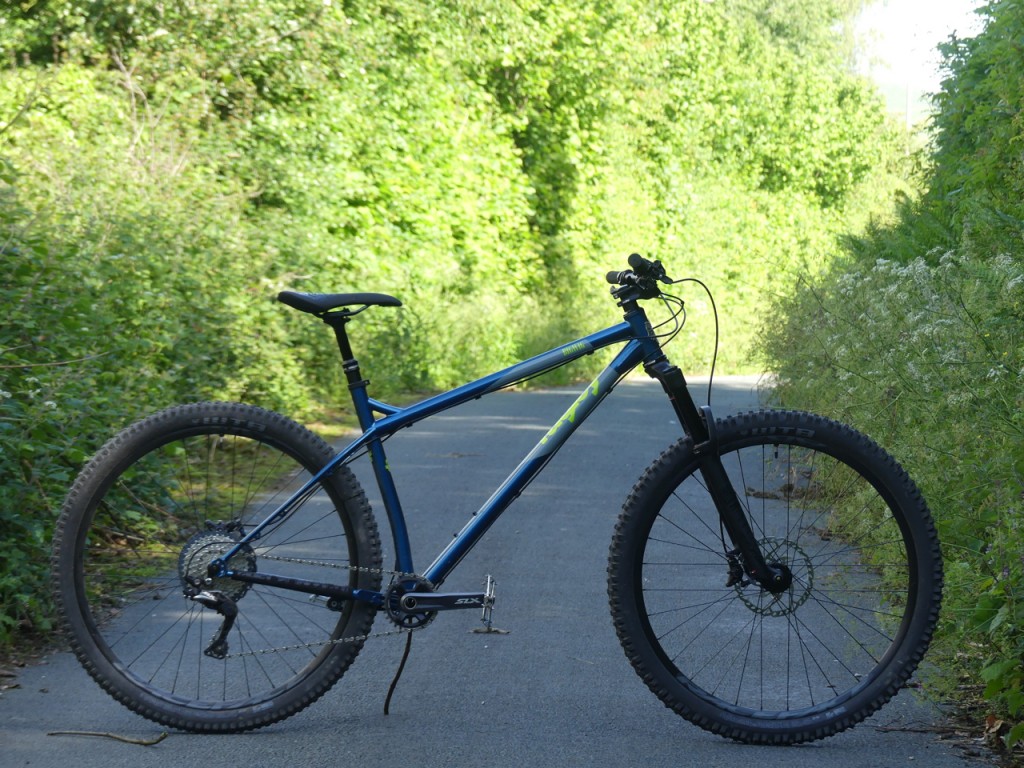 The frame does need a mention as it's the star of the show. Welded from Custom Triple Butted 4130 CrMo Steel, it's a thing of beauty. The three-finger chainstay bridge remains from the previous model and the slender seat stays add compliance and give the whole thing a refined look. The cable routing is sensibly external and bolts on with no-nonsense attachments.  At £1750 in the UK it's not a small investment, but it's a lovely frame with some sensible kit.

It may have been a while since I was on a hardtail, yet the familiarity of a classic bike is hard to forget. Visions of incredible speed went out the window early as, although it's a hardtail, this is a steady climber. Mostly this is down to the weight, which is not huge, but also the tyres, which are big, chunky and not going to win an XC race.

Climbing is a steady, diesel engine type affair, gradually winching through all manner of technical difficulties. The riding position is roomy, but the long-ish stem and slack seat angle mean it's a little stretched. A shorter stem makes a bit more sense, but a steeper seat angle would really help. Therefore, providing climbs are steady affairs and technical enough to need the big rubber, the Big Wig works just great. 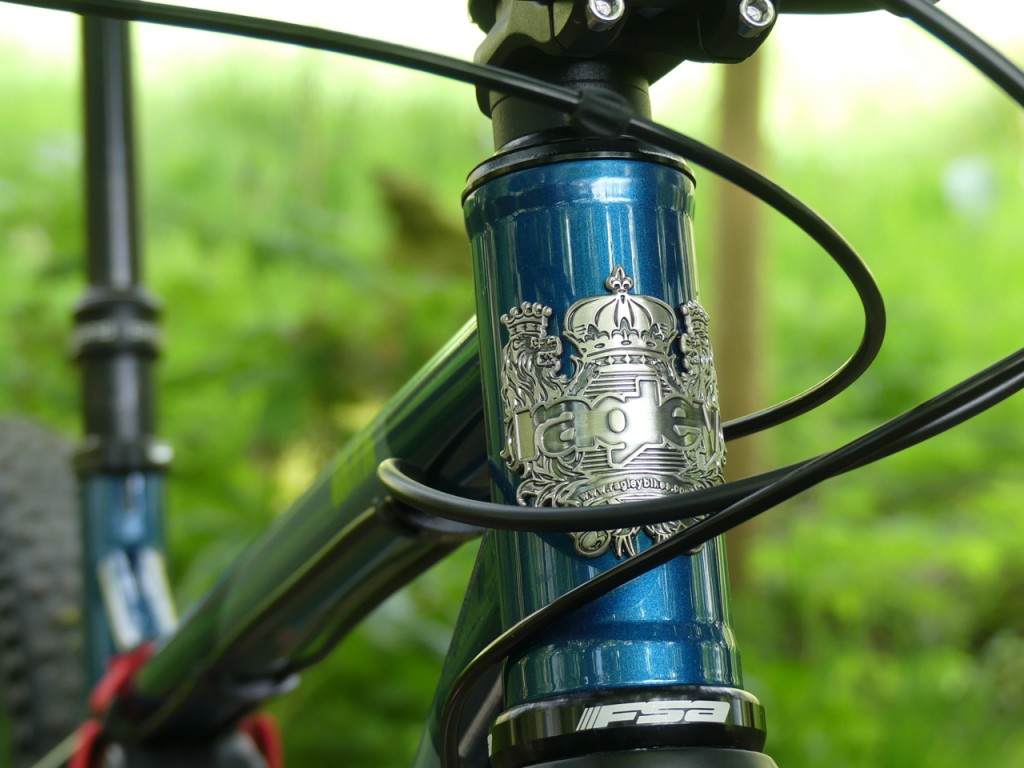 Pedalling anywhere becomes a considered task with the exceptionally low bottom bracket. If the trail is rutted or rocks are involved then you have to be tactical about when and where you put the power down. Once the trail gets flowing and needs power to keep the fun progressing, there is a pay off between safe pumping of the trail and risky pedal catching. On open trails there is no issue, but that bottom bracket height is definitely something to bear in mind.

Once pointing downhill with gravity firmly on your side, the whole set up starts to make more sense. Without the need to pedal, the bottom bracket height becomes your best friend, and the Big Wig can be ridden into some serious holes and come out smiling. The compliant steel frame takes the sting out of the tail and the low bottom bracket and relatively long front centre give a calm stability to the ride. It's probably as stable and comfortable as you can get without getting rear suspension.

A shorter stem would sharpen up the steering, but the front end is where the action is and this is reflected in how the bike needs to be ridden. Ride the front and drive the big tyre into the turns and the rewards are there in bucket loads, again that low bottom bracket keeping you safe from getting hooked up on the terrain. When the speeds or gradient increase the Big Wig makes more sense. 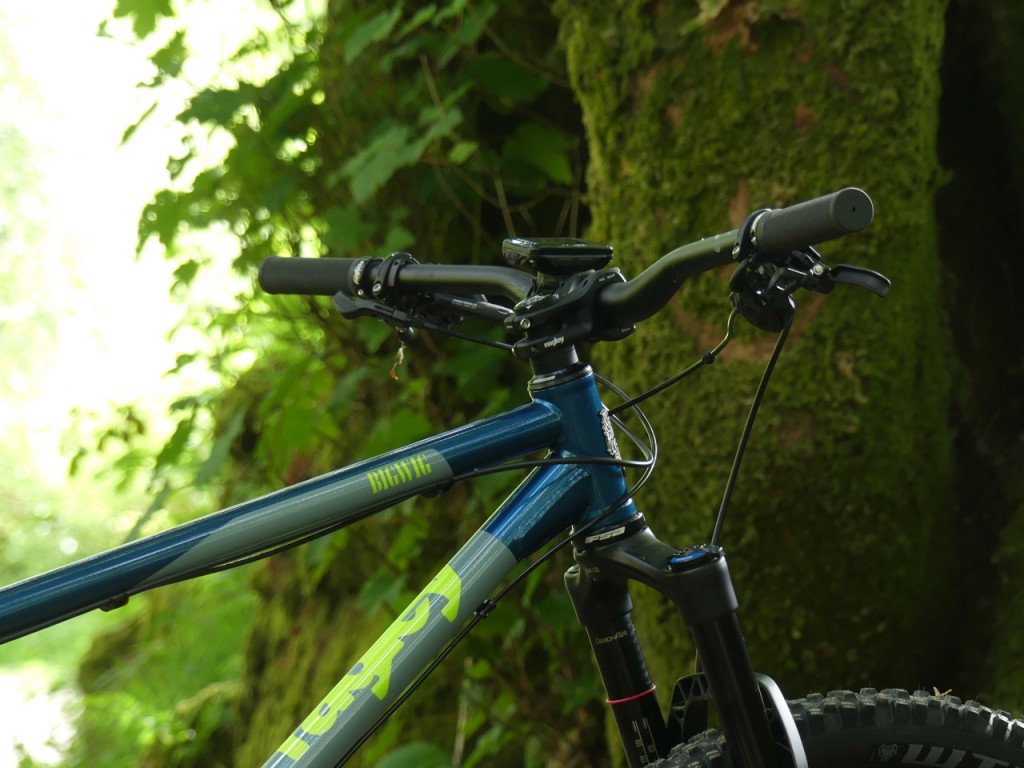 A 130mm hardtail could be considered a versatile trail bike on paper, but the Big Wig shares too much DNA with the rowdy long travel Blue Pig to be particularly inspiring anywhere other than plummeting. Maybe with a higher bottom bracket and more XC build the Big Wig could be something else, but as it stands, it's a wild descender and that should be why you would want this bike.

It would have been great to see Ragley re-emerge with some truly wild numbers and stay at the front of the progressive hardtail game, but I feel they've played it safe, which is a slight shame. For £1750 GBP it's going to be connoisseurs of steel hardtails who are drawn to the Big Wig, and as a result will be thoroughly satisfied with everything it offers.

Don't let the shorter travel fork fool you, the Big Wig is a low-slung, rowdy descender at home on wild trails and rough tracks. The lovely frame and sensible components make for a tasty bike, but the price may be hard to swallow. 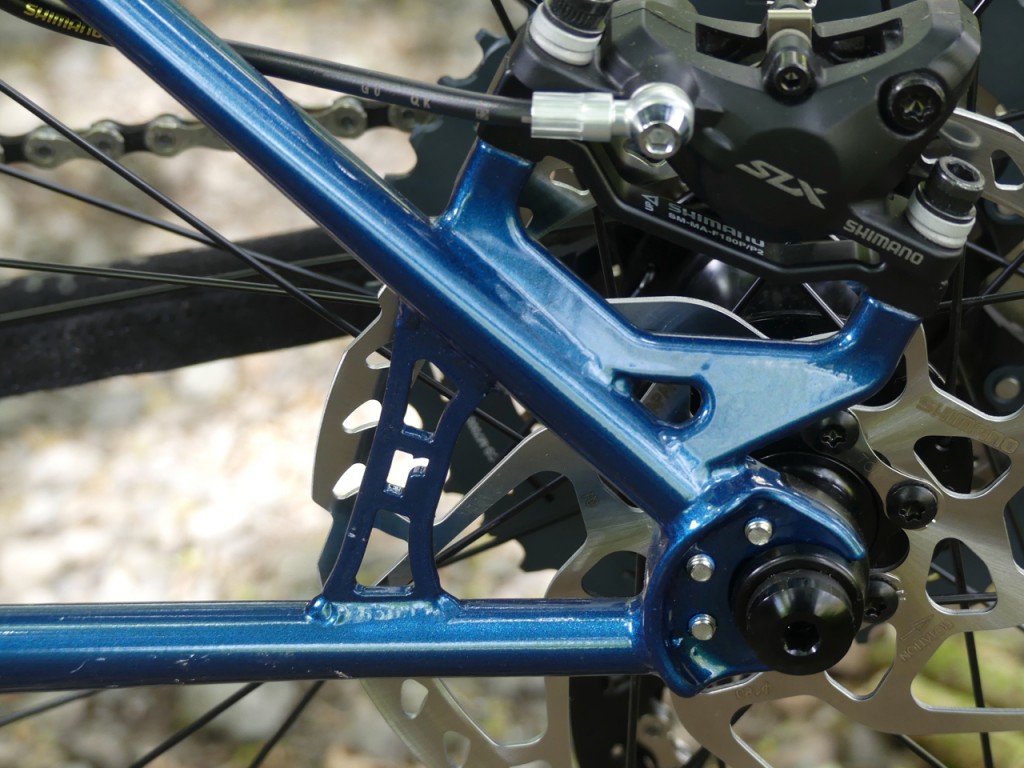 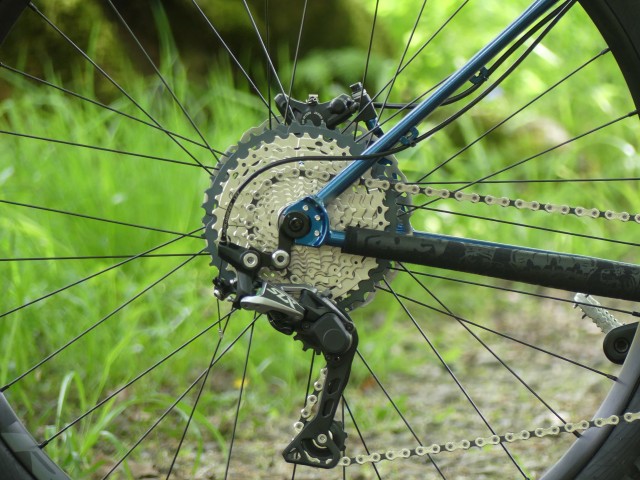 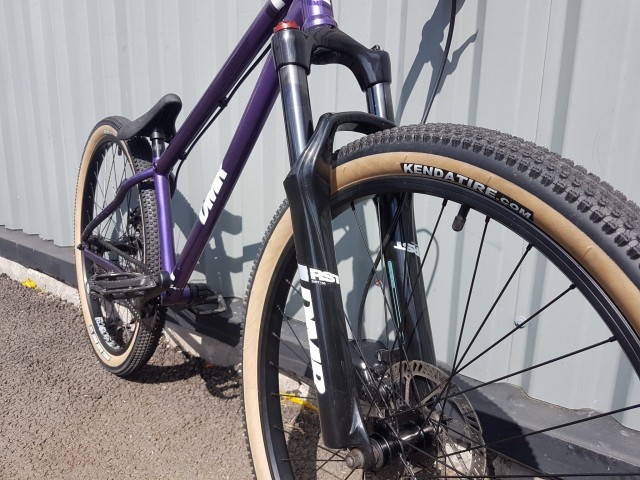 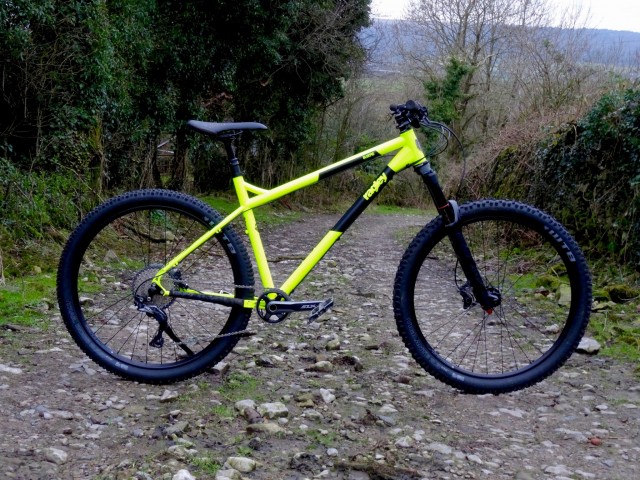 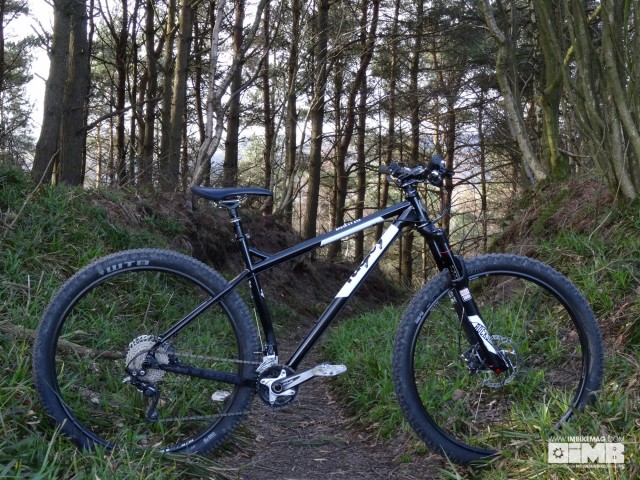 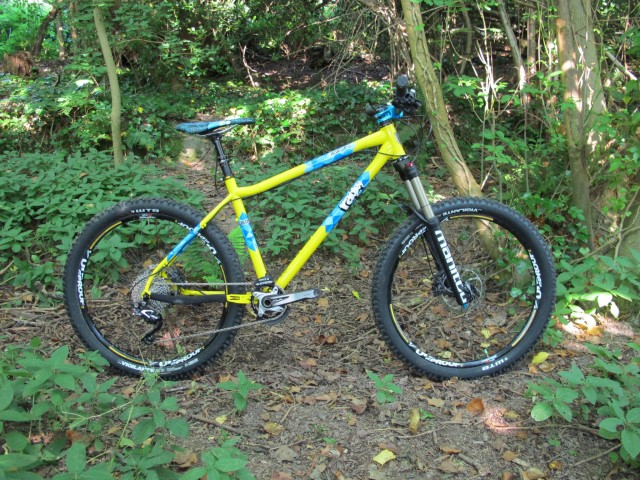 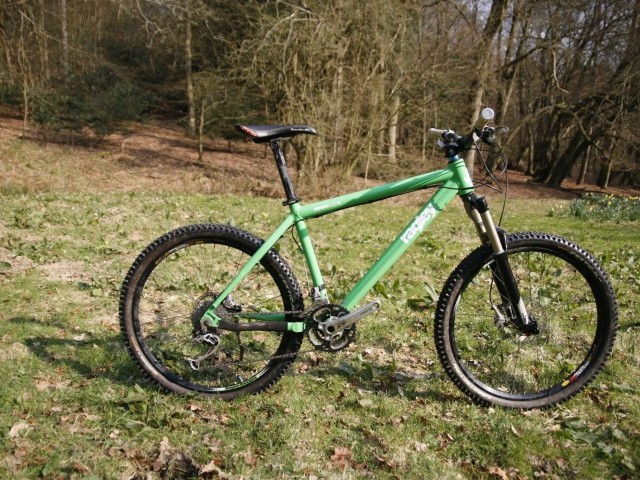 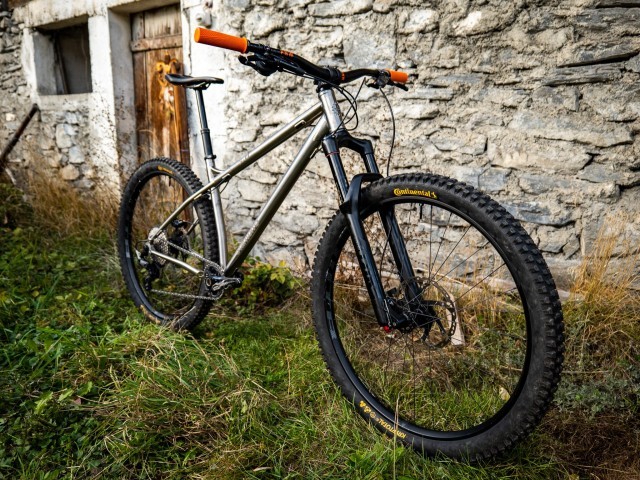 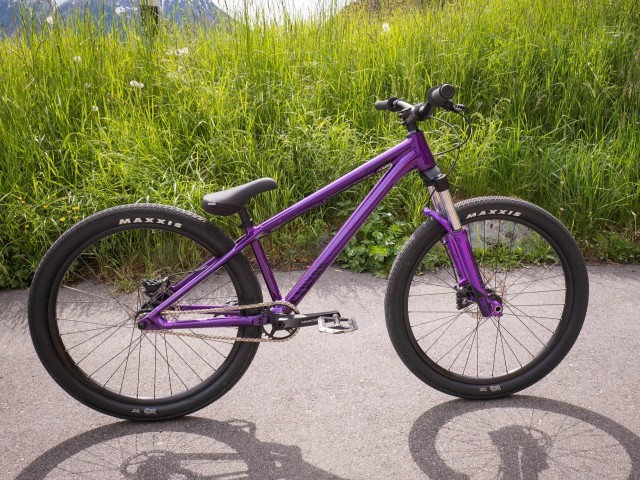 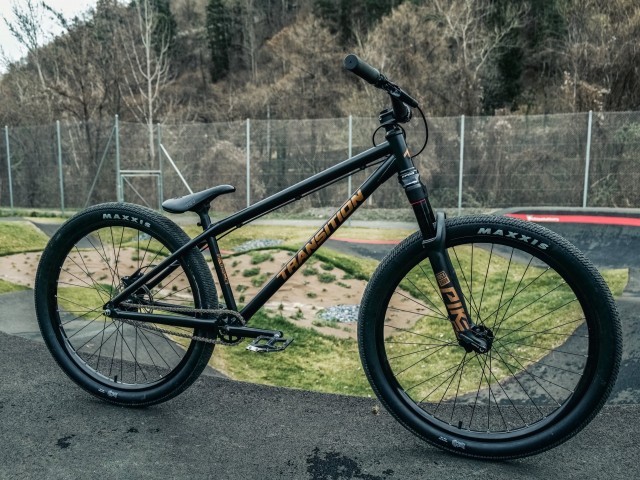 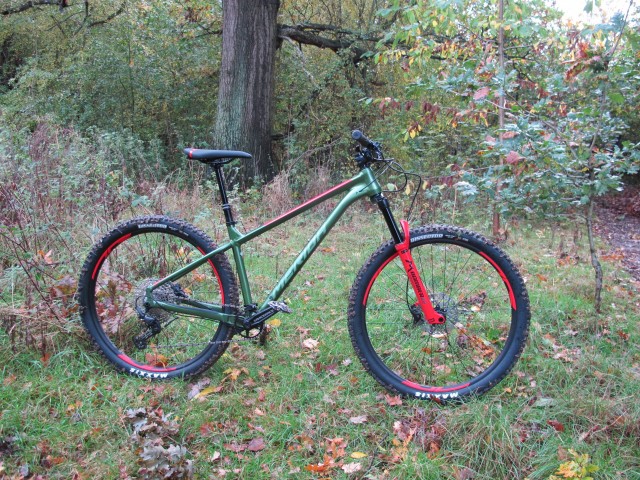 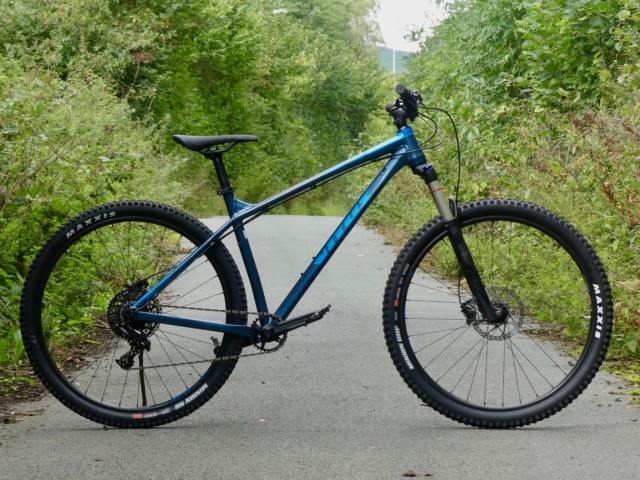 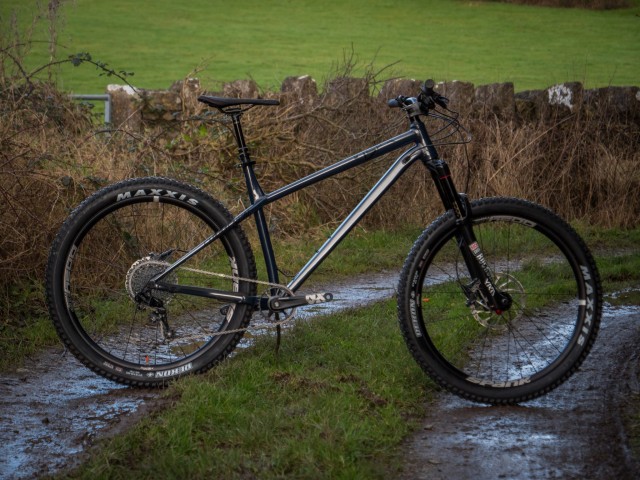 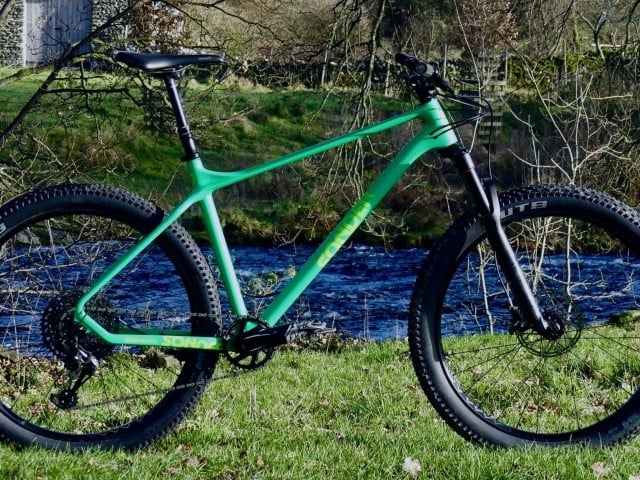 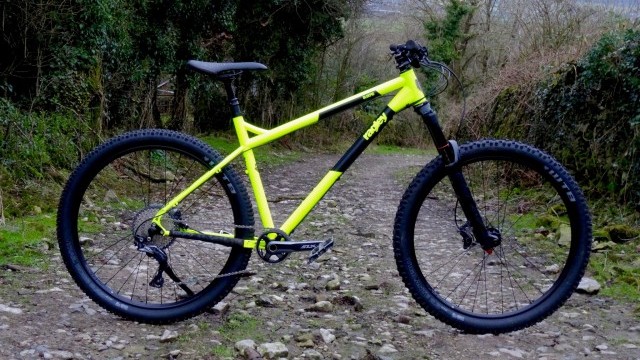 The UK is the home of hardcore hardtails, and Ragley’s offering in the form of the Blue Pig stays faithful to that with this beast of a steel hardtail. For those that don’t know them, Ragley Bikes are a UK company who specialise in the gnarlier end of the hardtail market, and the Blue Pig sits at the top of… 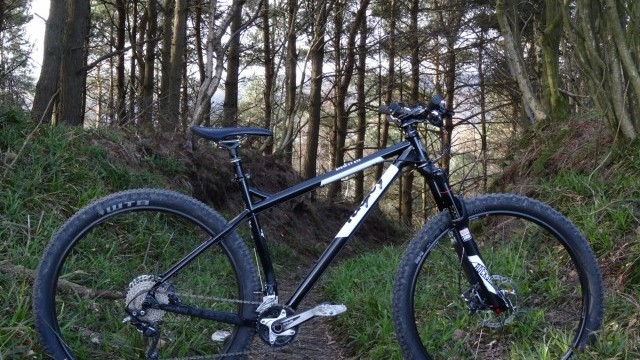 Ragley have been through a few changes behind the scenes in recent years, but at their core has always been the desire to make hardtails of a very British persuasion. Originally from Yorkshire and the brainchild of Brant Richards, they were some of the original “hardcore hardtails”. Times have moved on, people and locations have changed (they’re now based in… 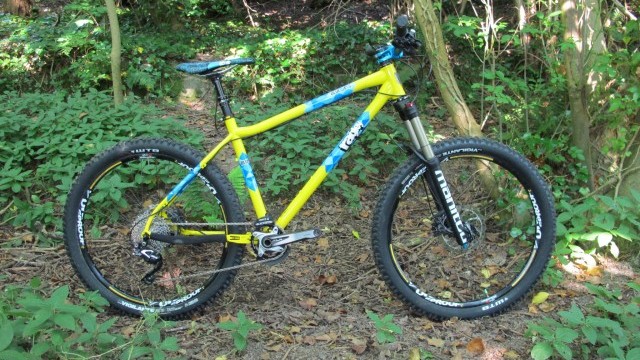 Ragley describe themselves as a hardcore hardtail company with the design ethos of “long front centre, slack head angle, steep seat angle and FUN”. As soon as the bright yellow Blue Pig left the box it was obvious that it more than met their ideals. With a steel frame, slack head angle, long travel fork and dropper post, there was…