Two podium finishes and a win in the team ranking

Round Five of the UCI XCO World Cup in Mont Sainte-Anne, Canada, turned out to be a great success for the Multivan Merida Biking Team! José Hermida finished second in the men’s race and Gunn-Rita Dahle Flesjå crossed the line in fifth, adding to performance that was good enough to win the team ranking.

Mont Sainte-Anne hosts one of the classic races in the sport of mountainbiking, and the cross country course is known as being highly selective. Technical climbs, steep descents and a tricky rockgarden make sure that only the best compete for the win here even when it’s dry. Only that it was wet this time in Canada: It was raining at the beginning of the women’s race and during the final lap of the men’s race, which made things all the more difficult. Which was good news as the riders of the Multivan Merida Biking Team could rely on Merida’s Big.Nine bikes and Maxxis tires.

Gunn-Rita Dahle Flesjå did not have the highest expectations for the race in Canada, as she had to take antibiotics after her win at the European championships. No wonder the pace of the leaders was just a bit too high, but the Norwegian still showed an appealing performance, riding in fourth position at times. “Just like in La Bresse, I was racing with Katerina Nash, but this time it was not for the victory. We had a good and hard fight and she finally got the better of me. But finishing in fifth is alright seen the circumstances, it’s a podium finish after all!” Dahle Flesjå sums up her race. 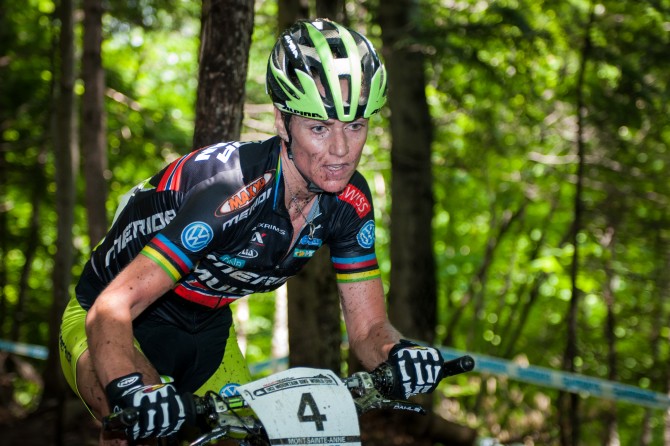 On the same track where he rode to the world championship title in 2010, José Hermida wanted to show that he’s back at the top of the game in the men’s race. As things were not going as well as expected in the early season, the Spaniard decided to change his plans for the season in order to get back to his race speed in time for the Olympic games: “It’s never easy to kind of restart the season in June, but I managed to more or less match the speed of the fastest guys out there”. Soon after the start, the Spaniard moved into a high-quality chasing group that had formed behind race leader Nino Schurter.

After two laps, it was obvious that José Hermida was the strongest of these chasers, so he set off on his own and managed to get Schurter in his sights on various parts of the track, thus keeping him within reach. And that was to pay off “When Nino suffered a flat, I was back in contention for the win all of a sudden. Due to the rain, the course was extremely tricky for both of us during the final lap. Unfortunately I could not avoid a sprint as Schurter is very strong in that aspect. But I am glad to be back in business and to my race speed”, Hermida said. 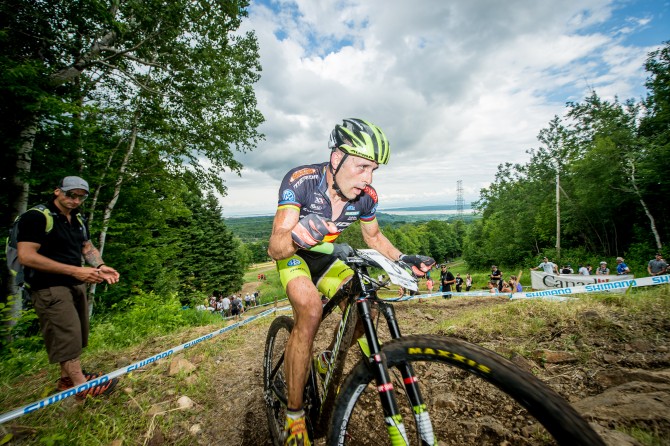 Early on in the race, Ralph Näf also mixed it up way up front, “But then I hit a tree, and that cost me time and also my rhythm a bit, as it was an up and down race after. It’s a pity because I could have fared way better than finishing in eleventh”, Näf commented, adding: “But it’s good to see that José is back to his old strength!” Jochen Käß also found an opportunity to boost his morale: “After a good start, I chose a wrong line and lost a lot of positions in the pack. From that moment on all I did was passing others, and with some more luck, a ride like today’s results in a top15 finish rather than in the 18th place it actually did.”

Rudi van Houts was the only rider of the Multivan Merida Biking Team to miss out on a top 20 finish. The Dutchman had a good start and was riding in tenth position when he cut the sidewall of one of his tires on the first lap. He had no choice but to run for a far distance to get to the tech zone. “When the flat was fixed, I was dead last and had lost six and a half minutes to the leaders. Nevertheless I decided to go on and I managed to pass quite some riders before getting lapped on the second-to-last lap of the race”, van Houts commented on his mishap.

Thanks to the podium finishes of both José Hermida and Gunn-Rita Dahle Flesjå and the top20 finishes of Ralph Näf and Jochen Käß, the Multivan Merida Biking Team managed to win the team ranking at Mont Sainte-Anne’s worldcup race – another beautiful success. 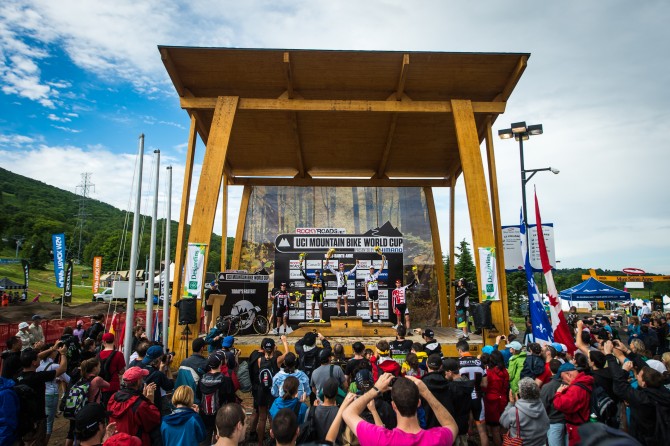 The team are now in Windham, New York, preparing for the sixth World Cup XCO race of the season. Wish them luck!

Merida Bikes | The Life After the Race Tape...