Sheffield-based retailer Planet X Bikes, the UK’s second largest bike builder, has announced a new partnership with Barclays Bank as they gear up for continued growth.

Planet X Bikes, established in Sheffield over 20 years ago, designs and builds very high quality bikes, selling direct to cyclists around the world. 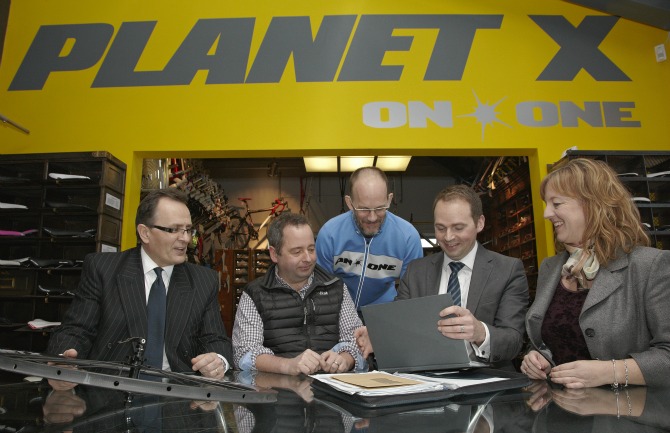 The Planet X team are looking to expand!

David Hanney, Chief Executive Office of Planet X Bikes said: “Barclays funding underpins our growth plans. We design high quality performance bikes, source the best components and assemble the bikes here in Sheffield to order.  Our direct business model means we offer great quality and unparalleled service at highly competitive prices whether customers buy online, over the phone, or in one of our destination stores.  The funding will help create 50 jobs over the next 3 years.  As passionate riders the timing is perfect as we are all thrilled and excited at the prospect of Le Grand Depart coming to Yorkshire and the new partnership with Barclays will allow us to grow in the run up to Le Tour De France.”

Planet X Ltd has transferred its day to day banking to Barclays together with working capital, term debt, foreign transaction capability and has also negotiated borrowing facilities for their customers through Barclays Partner Finance.

Pete Wilmer, Barclays Relationship Director commented: “There has never been a more exciting time for cyclists in Yorkshire with Le Grand Depart in 2014 and the new funding will allow David and his team to take advantage of the opportunities arising leaving the business well placed for future growth. This deal serves as a clear indication that Barclays is open for business for quality transactions in well managed companies.”

Planet X is a leading designer, builder and retailer of performance bikes, clothing and equipment.  Since being established in Sheffield in 1987 it has grown to be the UK’s second largest assembler of bikes with more than 50 employees.  It has a unique direct to consumer business model with brands including Planet X, OnOne and Titus.  Its head office, assembly and warehousing facility is in Sheffield, Yorkshire.

What Goes Up Must Come Down

Tough at the Top

Monday Motivation | Your Friends Are Key To Your Progression

Learn To Jump With Brendan Fairclough

Scotty Laughland Overnights In The Cairngorms