Time to get your pump on! An international pump track race in two greenhouses with DJ’s and partying, sounds like our kind of event! Catch up with the highlights of what went down!

Emelie Siegenthaler and Noel Niederberger left everybody else behind and secured a Swiss doublewin!

During the weekend 9-10 of january the top mountainbike athletes met in the Ostermundigen suburb of Bern.
For the first time not only invited Pros came to the race, also amateurs ventured to join in a pre-qualification
race on friday, racing for a spot in the big final on Saturday. 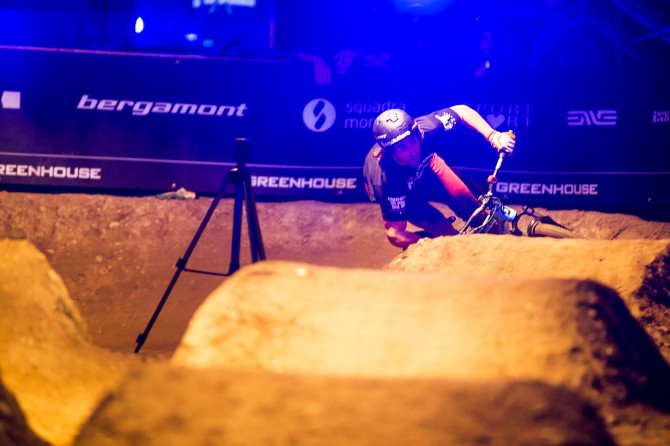 Friday was the qualifying day for both women and men. The women races took place for the first time at the
Greenhouse event. The inner circle of the race track offered a challanging course.

Angie Hohenwarter from Austria won the qualifications with Geraldine Fink, Switzerland on second position.
After the late cancellation of participation from the professional René Wildhaber, there were 17 startpositions
for Saturday race open. The amateur race was challanging and the quickest rider was Chaney Guennet, France,
followed by Lutz Weber and Lukas Jäger, Switzerland.

On Saturady the track has lost some humidity and the races were getting faster and faster. After the trainings,
the women opened up the Race Night. With spectators crowding the indoor track, Emilie SIegenthaler (third
place in the friday qualifications) won, follwed by Angie Hohenwarter and Geraldine Fink. The woman race was
appreciated among both spectators and riders, surely next time there will be more participants.

Just in time for the Men Race start, the race area – consisting of two greenhouses, flower preparation room
and five external tents – was filled with spectators. The spirit of the race was high and the spectators followed
the pumptrack race directly and through the many monitors showing all angels of the race. Exiting turns,
jumps, a log-section and high class mountainbike racing was enjoyed by both riders and spectators.

Right before the end of the race, Adrien Loron, France, was leading the final at the split time until an small
error in one of the deep burms brough him to the ground, leaving the number one position to Noel Niedereberger,
Switzerland who already won the qualification race on Friday. 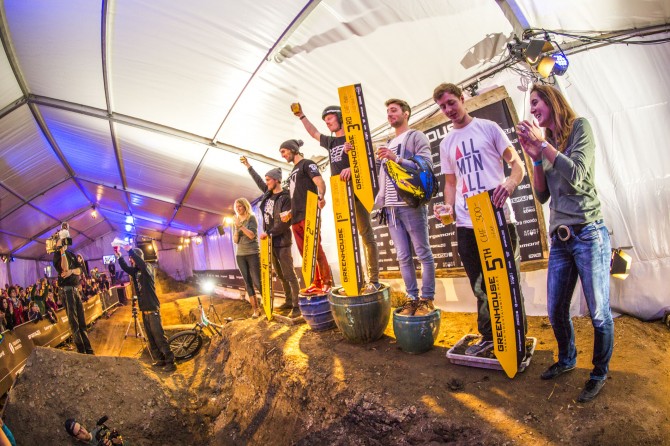 Right after the race, the athletes were honoured on the – soon to be danc floor. The DJs Kermit and Funky
Child therafter took the lead and kept everyone up and running until early morning.

The probably most different Greenhouse in the world has once more proven that even with 80 years of activities
there is still a lot in there to enjoy.

The organizers are happy that once more the Event has brought a lot of fun and entertainment for participants
and spectators. Once more it was possible to attract professional riders that gives it all to the exitment for
the spectators. The ambiance in the old green houses is helping making this recurring event more than just a
weekend of mountainbike racing.