Norco Bicycles has partnered with Jill Kintner and Bryn Atkinson, as title sponsor, to re-launch the Norco World Team. For 2012 the team will racing the downhill race scene onboard the newly designed Aurum downhill bike. Bryn and Jill are dedicated to reaching podium positions at every race they attend and representing Norco on the world stage.

Jill Kintner is one of the most successful female cyclists to compete on two wheels. With a collection of titles in BMX, 4x, slalom and downhill that spans from an Olympic medal, to world titles in 4x, and multiple national championships in all four disciplines she is a dominant figure on the race circuit. She finished 9th place overall for 2011 in her first year of World Cup downhill, and for 2012 is looking to come back with vengeance and best this result.

“With a new trainer and new bikes, we are now running a program with a fantastic list of sponsors; it feels like everything is clicking into place! The new Norco bikes have an incredible feel; I especially notice with the shorter rear end a difference in my balance point and turning ability thanks to the Aurum’s GRAVITY TUNE. These bikes are really well designed, and I am honored to be a part of the Norco family.” – Jill. 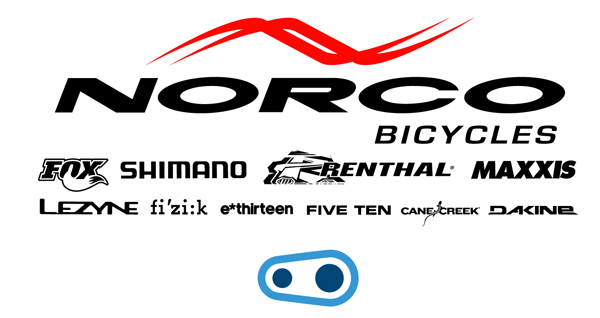 Bryn Atkinson has an inspiring presence on a downhill bike. With a highlight reel that includes numerous top 10 World Cup results, two US Open championships, a Pro GRT series championship, and many feature video segments, he has the speed, style, and ability to get the job done.

After a great start to 2011 with an 11th place finish at the first round of the World Cup, Bryn broke his femur and elbow, forcing him to sit out the remainder of the season. This injury fueled his motivation to get better on the bike, and come back stronger in 2012.

Healed up and “ready to rip”, Bryn is back in top form for 2012: “I’m super excited to start fresh with a company like Norco. Their 2012 line of bikes ride smooth and are really capable, I can’t wait to get ‘em world cup dirty!”

The team will be hitting premier events including all UCI World Cups; the Sea Otter Classic, Kokanee Crankworx, and select USGP events. Jill and Bryn will also compete in their respective National Championships.

“Norco Bicycles is excited to have both Jill and Bryn join the Norco family. Their experience and expertise will be a great asset to the continued development of the bikes and the engineered technology platforms we are so proud of. Everyone at Norco would like to wish Jill and Bryn the best of luck in the coming season and welcome them to their new home here at Norco” said Pete Stace-Smith, Norco PR Marketing Manager.