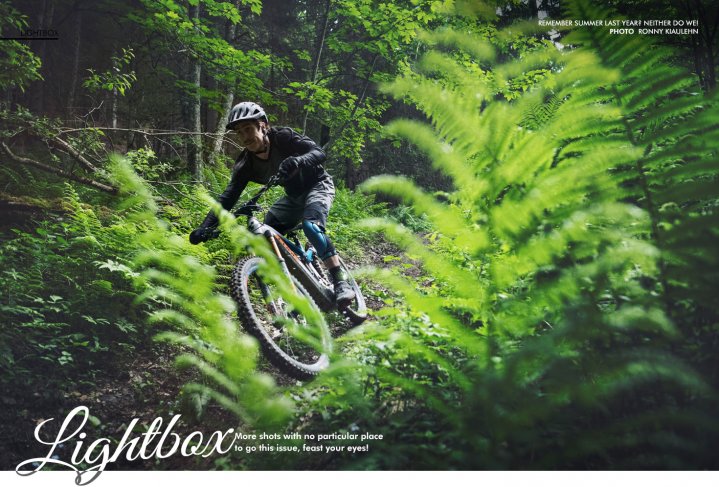 Check out these awesome MTB photos!

This issue we head to Scandinavia with Hanna Jonsson and her friends to explore the incredible trails on offer. Rob Warner stops by for a catch up to discuss his incredible career in the bike industry that shows no signs of stopping. Fabian Gleitsmann heads to the Venosta Valley to explore Switzerland, Italy and Austria in the same day, and we have bikes and components on test from Cube, Vitus, SRAM, Vecnum, Gloworm, Ravemen and Julbo. Clive Forth is on hand to improve our skills in his excellent technique section, and we have loads more inside too, be sure to check it out and share it with your friends!

It's another belter this month packed full of fantastic content from around the world. Inside we take a look at Red Bull Rampage with Cam Zink, Fabian Gleitsmann discovers the trails of Zermatt and Ewen Turner finds out more about the world of linkage forks. We're also encouraged to seek out hidden lines on our local trails by Going Nowhere with Ben Gerrish, and we chat with Martha Gill about riding and racing. New bikes from Marin, Kona and Kinesis are taken for a spin, and we test wheels from Industry Nine, Hunt and Sector. Clive Forth is on hand to improve our skills in his excellent technique section, and we have loads more inside too, be sure to check it out and share it with your friends!

It’s a belter of an issue this month with some of the best stories, images and videos from around the world of MTB! This issue we head to the north of Scotland to discover some trails well off the beaten track and we catch up with the new faces of women's downhill racing. Ewen gets behind the scenes with Merida’s new e-bike and he chats to Angel Suarez about why he loves racing bikes. On test, we have fresh bikes from YT, Kona, Marin and Merida and we test kit from Hayes, Muc-Off and MRPs new short travel trail fork. Clive is on hand with the technique, helping you to improve the way you ride and there is plenty more inside too!

This issue we head into the wilderness and get rad whilst bikepacking, Ewen chats to Jasper da Seymour about the creative film making process and Fabian Gleitsmann heads to the highest mountains you can ride in the Alps. We chat to Kilian Bron about mass start racing on snow and talk to Dr Leatt about neck braces. On top of all this, we have bikes from Pivot, DMR and Radon on test alongside three of the best short-travel forks on the market. Plus technique with Clive Forth and lots more inside!

Summer is on the horizon and we've already been playing in the dust. This issue sees us head to British Columbia, talk about modern XC bikes and find out more about two iconic World Cup photographers. We catch up with Merida rider Toni Ferreiro and get some science behind riding eyewear, whilst the test team check out bikes from Pole, Cube, Ragley and Marin alongside kit from Leatt, Marzocchi, Motion and Julbo.

Spring is here in the Northern hemisphere, and the trails are drying out nicely. This issue we get adventurous and head to the French and Slovenian Alps for some epic journeys through the mountains, Ewen Turner talks to Darrell Voss, the man behind Naild and team IMB head to New Zealand to compete in The Pioneer. Testing features the new bikes from Cannondale, Cube, Ghost, Greyp, Haibike and Merida as well kit from Hope, Lake, Leatt, SRAM and Box. Clive Forth is on hand with the technique once again, this issue he is looking at going around corners with speed and style there is plenty more inside too!

2019 is well and truly underway now, and we are stoked on another fantastic year of mountain biking. Shock horror spring might have sprung already outside the office, and it’s great to get back on the trails! This issue we talk to Dan and Gee Atherton about racing and catch up with Brendan Fairclough and crew to talk about Rampage 2018. We have some exciting destinations to visit including the sublime Revelstoke and Yukon! As ever Clive is on hand with the technique, he’s looking at improving your riding in wild conditions, and we have some new bikes on test and much more inside too!

We're heading into Autumn in Europe and the trails are running prime after a great summer. This issue we head to Wales both for Red Bull Hardline and to check out the mighty Black Mountains Cycle Centre. We also chat with Alistair Beckett about bike design and Ewen Turner takes a budget hardtail to an enduro race. Short and long travel bikes get some testing alongside components to make your riding life better!

In this issue Isac Paddock delves into the relationship between Aaron Gwin and his mechanic John Hall. We chat to Katy Winton about racing and life as a full factory enduro pro. Plus the team go electric and ride some of the best ebikes around to see what the fuss is all about, and take a trip to the Tweed Valley in Scotland. Tests feature some fresh new bikes and wheelsets for every budget.

Summer is here, trails are dusty, and everything is good with the world. This issue we catch up with Jill Kintner and find out how to become Queen at Crankworx, Emily Horridge gets adventurous in the French Alps and Damian Rosso heads to Vermont. The FS Funn Factory team bring us up to speed with World Cup action, and we test hot new bikes and the best dropper posts around.

It's looking like spring in Europe but the snow is still clinging onto the trails. This issue we head south to escape the winter and catch up with the Trippin' Fellaz to get a solid dose of adventure. Isac Paddock takes us 'up north' and Ross Bell experiences the magnificent scenery and trails of Colorado. Bikes, kit and even some 2019 suspension gets a once over to finish off another fantastic issue!

It's the first issue of 2018 and things are already set for a great year of mountain bike action. This issue we head to the Alps and the Canary Islands, test out some drop bar bikes and get behind the scenes with the FSFUNN downhill team. Plenty of bikes and kit have been tested along with the usual collection of amazing photos and videos.

It's the last issue of 2017, but don't worry, we've not hit the sherry yet and we've still got the best content and tests from around the world to finish off the year in style. From insane dirt jumps with Matt Jones to riding into the heart of darkness in Tazmania, this issue takes us far and wide with the finest photos, videos and tests all in one place. Merry Xmas!

It’s issue 50, so we’ve been travelling the globe to seek out the very best in mountain bike content just for you! From Norway to Finale Ligure, Wales to New Zealand we left no stone unturned! Be sure to check out the latest issue, which is packed with the best stories, photos and videos from around the world. We’ve got technique, tests and so much more inside! Enjoy!

It’s a fantastic collection of bikes, people and destinations to get you inspired, motivated and generally psyched for all things mountain biking. We catch up with Greg Callaghan and find out what has made this year so successful, and take a trip to Croatia with Ross Bell. Part two of our Northern Ireland adventure finishes in Rostrevor and we get behind the scenes with Italian brand Formula. Enjoy!

It’s another stunning edition with loads of amazing stories, images and videos to keep you entertained! Inside we venture off to Ireland to discover what the vibrant MTB scene has to offer! Rebecca Parker asks they question all women want answering; do you really need a Women’s Specific Design bike? And Ronny Kiaulehn heads off to Fuerteventura and there is loads more inside too, be sure to check it out!

It’s another cracking edition with loads of fantastic stories, images and videos to keep you entertained! Inside we chat to one of mountain biking’s most entertaining characters, Yoann Barelli tells his incredible story! Ewen Turner spends an unhealthy amount of time investigating the modern hardtail, and James Swann heads to Tasmania to sample the stunning trails there!

It’s another huge edition with loads of fantastic stories, images and videos to keep you entertained! Inside Stu Lill goes heli-biking in New Zealand getting dropped in the wilderness and riding his way out with his buddies. Damien Rosso and Nico Quéré discover amazing trails in Hong Kong and Ewen Turner discovers what it really takes to be get on the podium at a World Cup!

It’s another packed edition just in time for the festive season to keep you entertained when you are off the bike! Inside Steve Shannon heads to the Canary Islands with Emily Slaco, we chat to Chris Cocalis from Pivot in our Behind the Brand feature and how about a bit of bikepacking in Iceland for the trail guide? Of course we have all the usual suspects too, be sure to check it out!

In this issue Euan Wilson heads on a bike adventure to Norway, using a boat to navigate the fjords and sniff out the trails! We head to Torridon in Scotland for our trail guide and Endura, the people who clothe Danny MacAskill feature in our Behind The Brand article. As usual Richard Kelly is on hand with the technique and we have loads more inside too, be sure to check it out!

In this issue Ewen Turner puts himself into full race mode and heads to the Alps, taking on the Enduro World Series in La Thuile and revisiting the Megavalanche in Alp d'Huez and asking the question ''Is this iconic bike race still relevant?'' Elsewhere O’Neal feature in our Behind the Brand piece and Steve Shannon takes us on a tour of Cumberland and Hornby Island in Canada.

In this issue Graham Beaumont travels to New Zealand with no particular plans. Sandra Sabitzer travels to the Azores in the Atlantic to check out some stunning trails and we feature Vitus in our Behind the Brand feature! We’ve also got technique with Richard Kelly, bike tests and a feature on the Tweed Valley, there is plenty more inside too...

In this issue Ewen Turner takes a look at the booming female enduro scene, these girls can shred! Steve Shannon heads to Nepal to do some serious bike trekking on the trip of a lifetime and we feature Commencal in our Behind the Brand feature! We've also got technique with Richard Kelly, bike tests and a feature on Crankworx Rotorua, there is plenty more inside too...